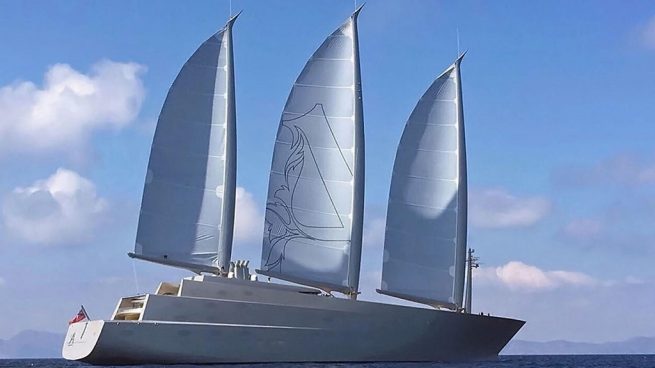 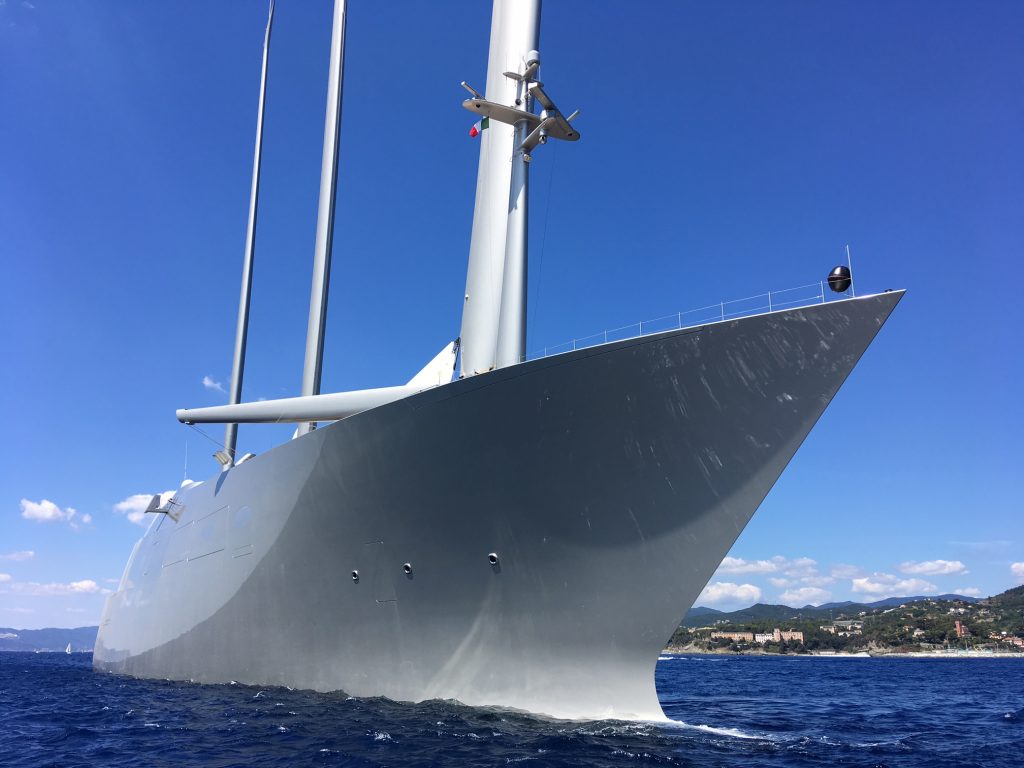 Let’s say immediately that “A” is a truly innovative mega yacht, certainly innovative outside the canon of the classic luxury yachts that we are used to seeing with its aesthetic of breaking with the sharp and futuristic lines the English magazine Boat International called it “border push superyacht”.

Its designer is the world-renowned French architect Philippe Stark, known for his modernization projects in various sectors ranging from yachting to construction to objects, furniture and more. He is one of the most sought after architects for his attention to the changes in time and for his marked sensitivity to understand the trends of contemporary design ahead of time. 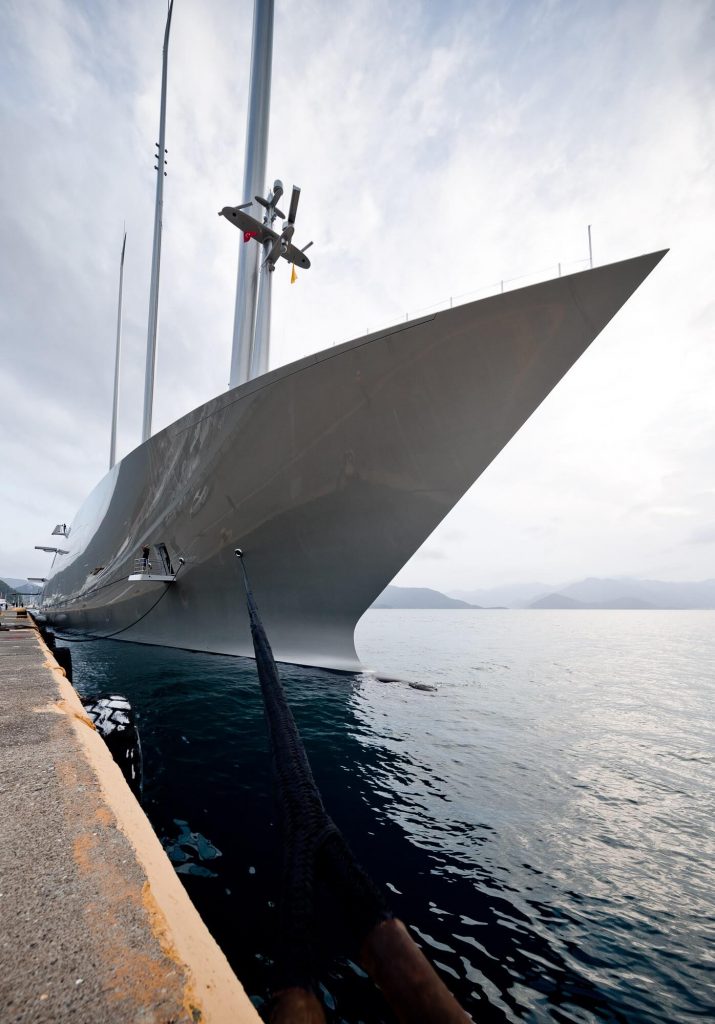 All his creations are born from the clear conviction that everything must be “useful” before being beautiful. Early ecologist his designs are always conditioned by environmental issues Philippe Stark defines “A” “a floating sculpture coming from a mental space”. Simply called with the first letter of the alphabet from the owner to be first in the naval registers, “A” is the largest private sailing yacht in the world with its 143 meters in length, 25 meters in width and 12,600 tons of weight. 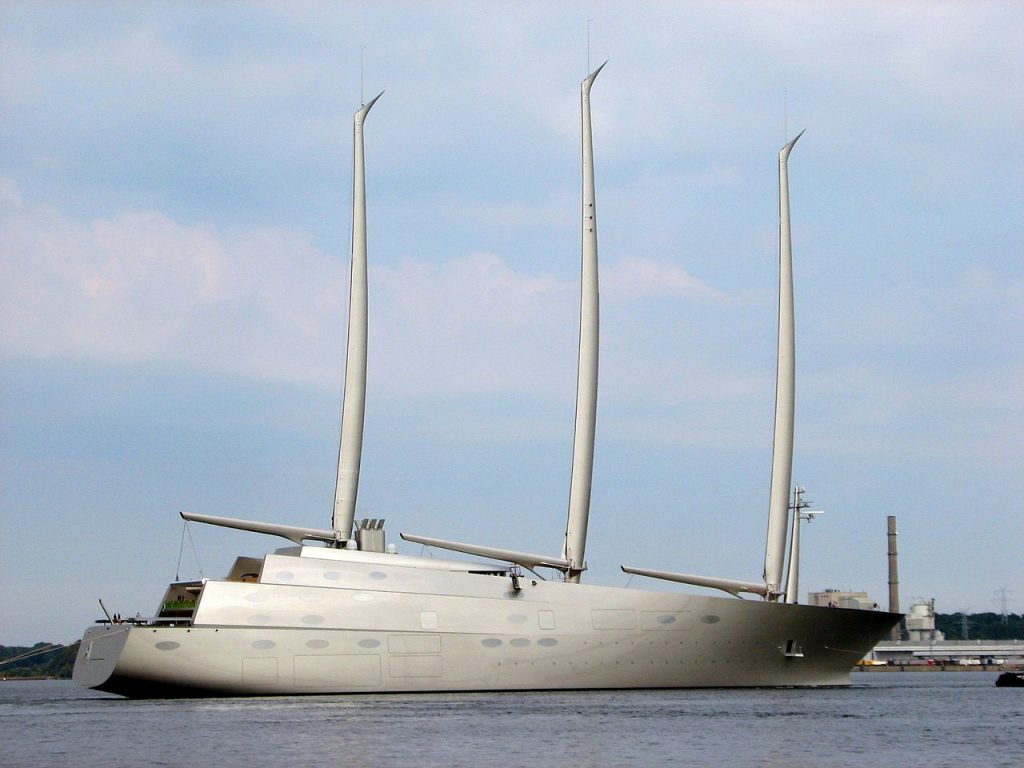 It is also the tallest in the world, its trees are taller than the Campanile di San Marco in Venice and the boat above the water is like an eight-story building. The yacht was built on the shipyards of Nobiskrug, Germany, known to satisfy the most demanding ship owners with the most extravagant requests.

In particular on this yacht has been installed a digitized control system that allows the captain on board to control the whole boat quietly from the bridge thanks to a black glass screen touch-scree bomb and 40 CCTV cameras that guarantee the security. Safety systems of this importance are only found on motor yachts of a certain level such as Azzam the most expensive and longest in the world or Eclipse the yacht of the Russian magnate Roman Abramovich. 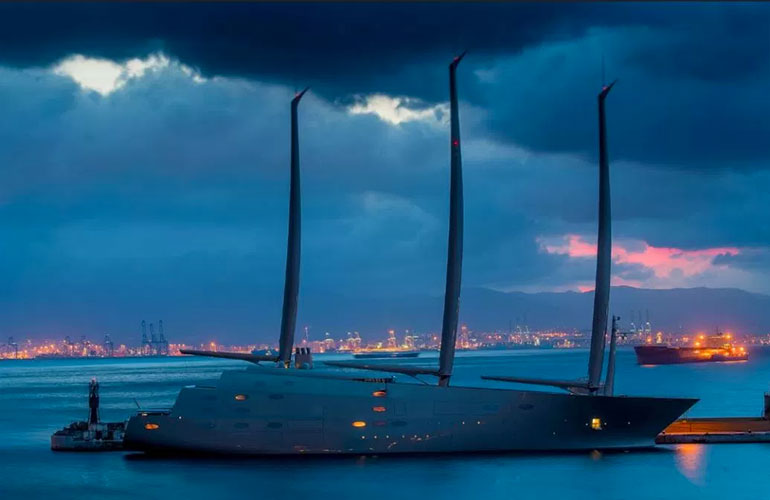 In addition, a series of glass panels is placed under the waterline that make up a particular underwater observatory that allows guests on board to admire the seabed. Among other things, one of the panels consists of one of the largest curved glass sheets ever built, with an area of ​​18 square meters.

The mega yacht consists of eight equipped bridges, all connected by numerous lifts, one of which is used for helicopter landing. The hull is in aluminum while the composite fiber trees, the teak decks. 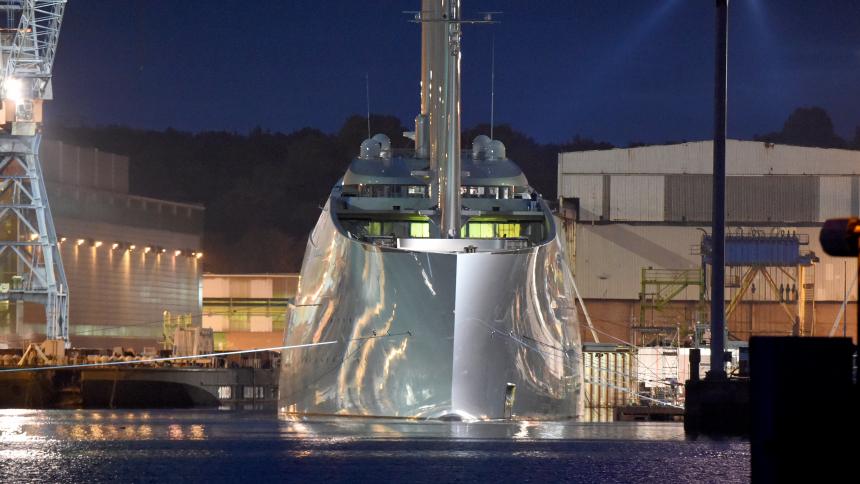 The sail plan consists of 3,700 square meters of sails inserted on three rotating trees of which the largest is 100 meters high above sea level to realize the majesty of this tree on the top, there is also room for a panoramic room .

The trees were made by the British construction site Magma Structures while the three fully automatic carbon fiber wings were produced by Doyle Sailmakers USA. The Dutch studio Dykstra Naval Architects instead studied the keel. 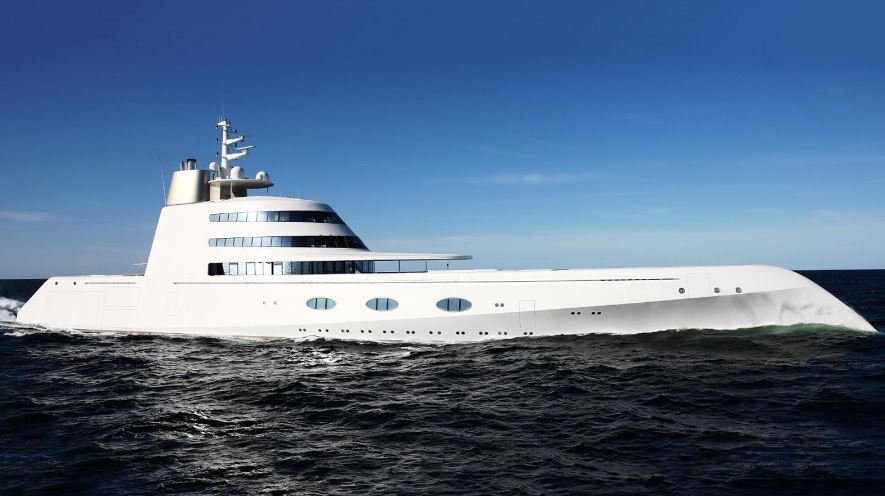 “A” is equipped with adjustable propeller and the propulsion is always guaranteed for the presence in the machine room of a hybrid diesel – electric system consisting of two 3,600 kW diesel engines and two 4,300 kW electric motors that allow it to travel at a speed cruise of 16 knots the maximum to 21.

The yacht can accommodate 14 passengers on board in 7 luxury cabins and a crew of 42 units. The interiors are obviously characterized by a showy luxury at the highest levels. The master cabin is a luxury suite comparable only to those found in the most exclusive hotels in the world, with bulletproof glass and rotating bed. All the cabins have been designed with luxurious details and below deck there is ample space to keep all the “jewelers” of the owner among them a small submarine. 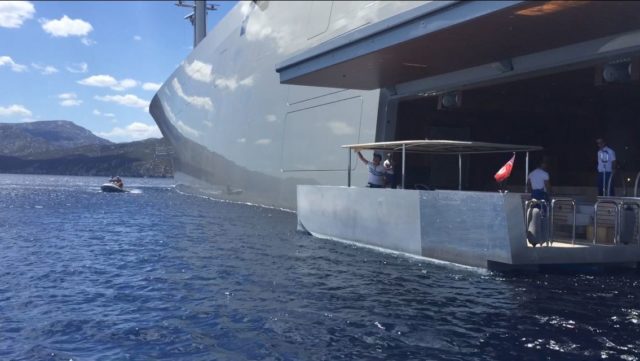 Throughout the yacht there is a large swimming pool and three spas, one of which has a glass floor that allows you to look down below. Undoubtedly it is one of the most advanced boats in the world of the moment built with the most advanced technologically advanced materials, set up with luxury and elegance but above all with unique characteristics. The mega yacht cost around 400 million dollars. The owner is Russian billionaire Andrey Melnichenko, with assets estimated at around 11 billion dollars, he is in the top 100 in the world ranking of the super rich, the main shareholder of Eurochem, one of the leading fertilizer producers in the world.

You can take advantage of this record before any other super rich will decide to overcome it no matter if it is a sheikh or a business man because in the world of superyachts there is a continuous competition to those who build the largest boat, beautiful, functional, singular and luxurious and the shipyards are ready to often meet all the exaggerated demands of the shipowner on duty. 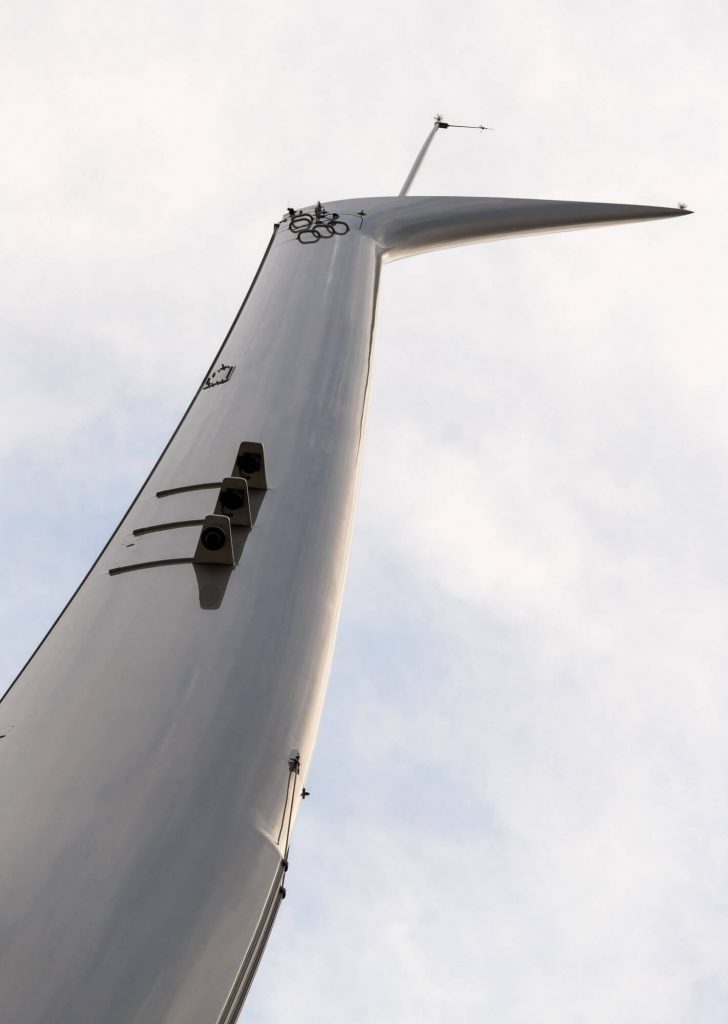 The construction of “A” began in 2012 and was delivered to the owner in May 2017 in Munich after a series of final sea trials and final adjustments carried out at the Avanti shipyard in Cartagena, Spain.

According to some commentators “A” is one of the ugliest boats in the world  a mixture between a luxury yacht and a submarine while for others it is the sailboat of the future.

What is certain is that in every place where thousands of fans were spotted, they were attracted by this floating sculpture and they could not resist the temptation to capture a photo or a small video of this impressive mega yacht on their smartphone that excites only looking at it its singularity demonstrates that it shrouds something very particular and also very different, attracts very much in the end this is what counts not go unnoticed. 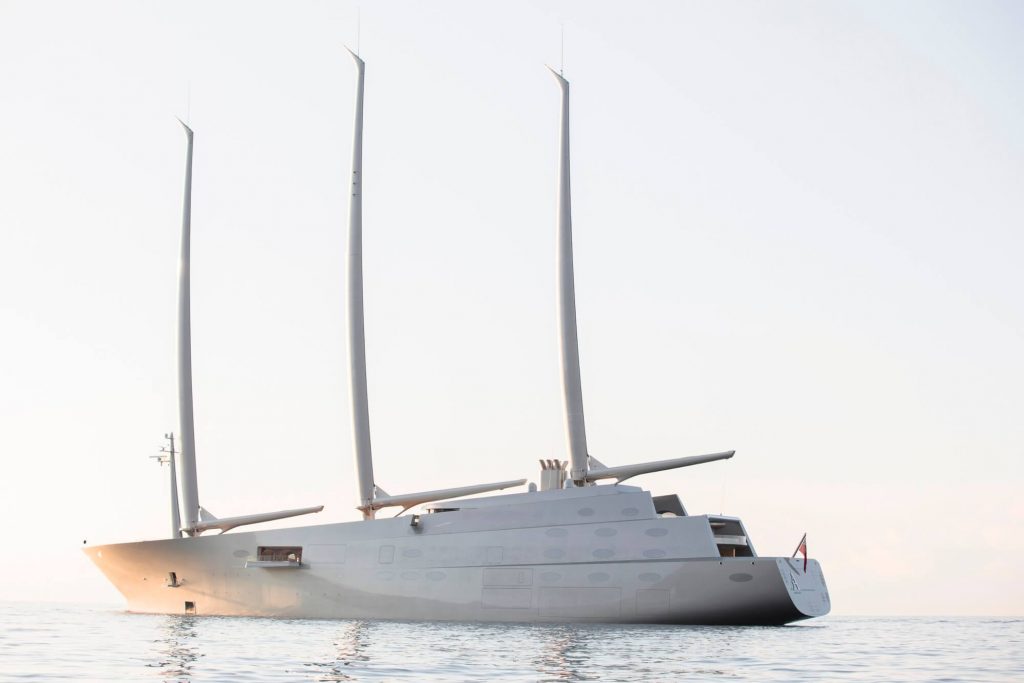 We just have to wait how this project by Philippe Stark will influence the achievements of the next yacht. 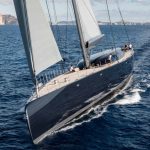 THE SAILING BOAT NGONI THE BEAST OF THE SEAS 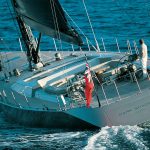 Dark Shadow the yachts in the yachting world icon