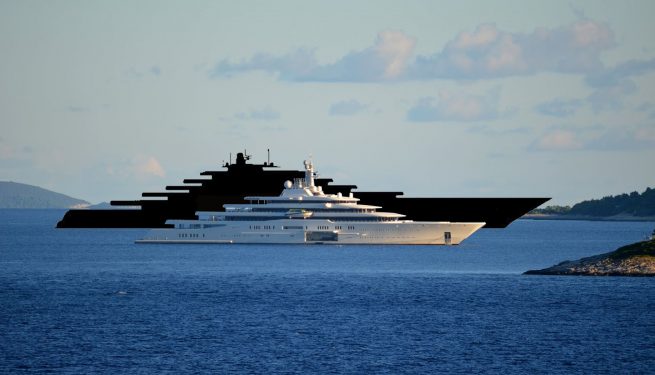 The 4Yacht Inc., founded in 2002 known as “Dream Makers” in the yachting world is a brokerage company that through its yacht professionals assist their clients in the purchase and sale of luxury yachts.

In October 2014, this company declares that it has obtained a contract to build Triple Deuce the 222-meter (728-foot) motor superyacht that would become the largest in the world.

This ad does it through its broker Craig Timm who comments “Project Triple Deuce is going to set the world on fire not only as the largest private yacht ever built … but also the most expensive, with a cost of over $ 1 billion dollars” .

This warning caused a stir in the yachting world not because of the great and strict confidentiality on the presumed name of the owner but it was quite unusual that a brokerage agency publishes through a press release the creation of a yacht of this magnitude by publishing in advance also the cost without defining when the order was signed, who are the designers, from which yard will be built. In this regard, the following statements were issued by yacht broker Craig Timm:

“And do not forget to add the annual operating costs – on a yacht of this size, the owner will increase another $ 20 up to $ 30 million a year.”

“Our client was worried that if we had built a yacht around 200 meters, then someone could have arrived like Roman Abramovich , which with the Eclipse , 163.5 meters long, surpassed that of the Sheikh Maktoum of only 1.5 meters. With the construction of the boat at 222 meters, the owner wants to make it difficult, if not impossible, to eclipse it “.

“And to those who raise doubts about the” morality “of such spending, Timm reminds that to build Triple Deuce will take between two and three million hours of work, so the yard will directly employ no less than 500 people for a period of three years. Not to mention the subcontracted works, those used for the materials already used on the market, and the crew of 70 people. “

Also in the GQ Italia magazine that deals with men’s fashion, luxury, cars, technology, food that had the exclusive right to publish the news on the project, more details were learned. In fact, as told by GQ Italia, the navigation of the boat it should take place through the thrust of three gas turbines capable of developing a maximum speed of 30 knots without excluding the most modern pod-azimuthal propulsion systems with electric transmission instead of rudders.

Other details concern the owner’s suite that will be developed on two levels on the seventh bridge for a total of 275 square meters with direct access to the heliport. Gym, bathroom with sauna, study and personal butler cabin complete the sleeping area.

Four 90-square-meter suites will be reserved for VIP guests, all the others will have to “settle” with 60-square-meter cabins each. The superyacht should accommodate up to 36 passengers. There are two swimming pools (one indoor), a barber, a hairdresser, a massage room, some Jacuzzis, a home theater room and many water games. Presumably delivery to the owner should take place through an intensive program by September 2018. 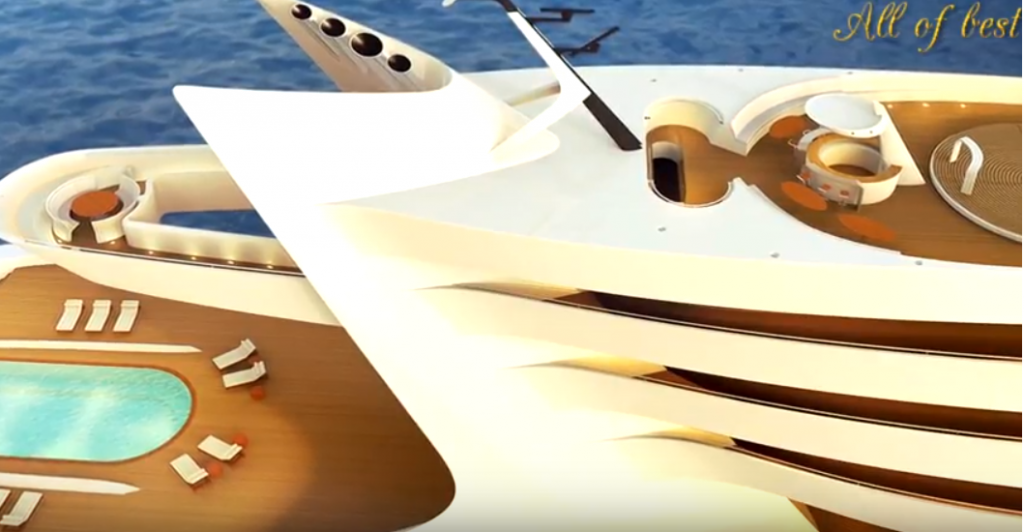 This boat would undermine all the records that now belong to Azzam long 180 meters cost 500 million dollars is the largest and most expensive and fastest yacht in the world of Sheikh al- Nayandi Abu Dhabi .

Triple Deuce with its 222 meters would detach Azzam, a good 42 meters not a few meters would be difficult but certainly not impossible to do better if some other billionaire decided to accept the challenge. 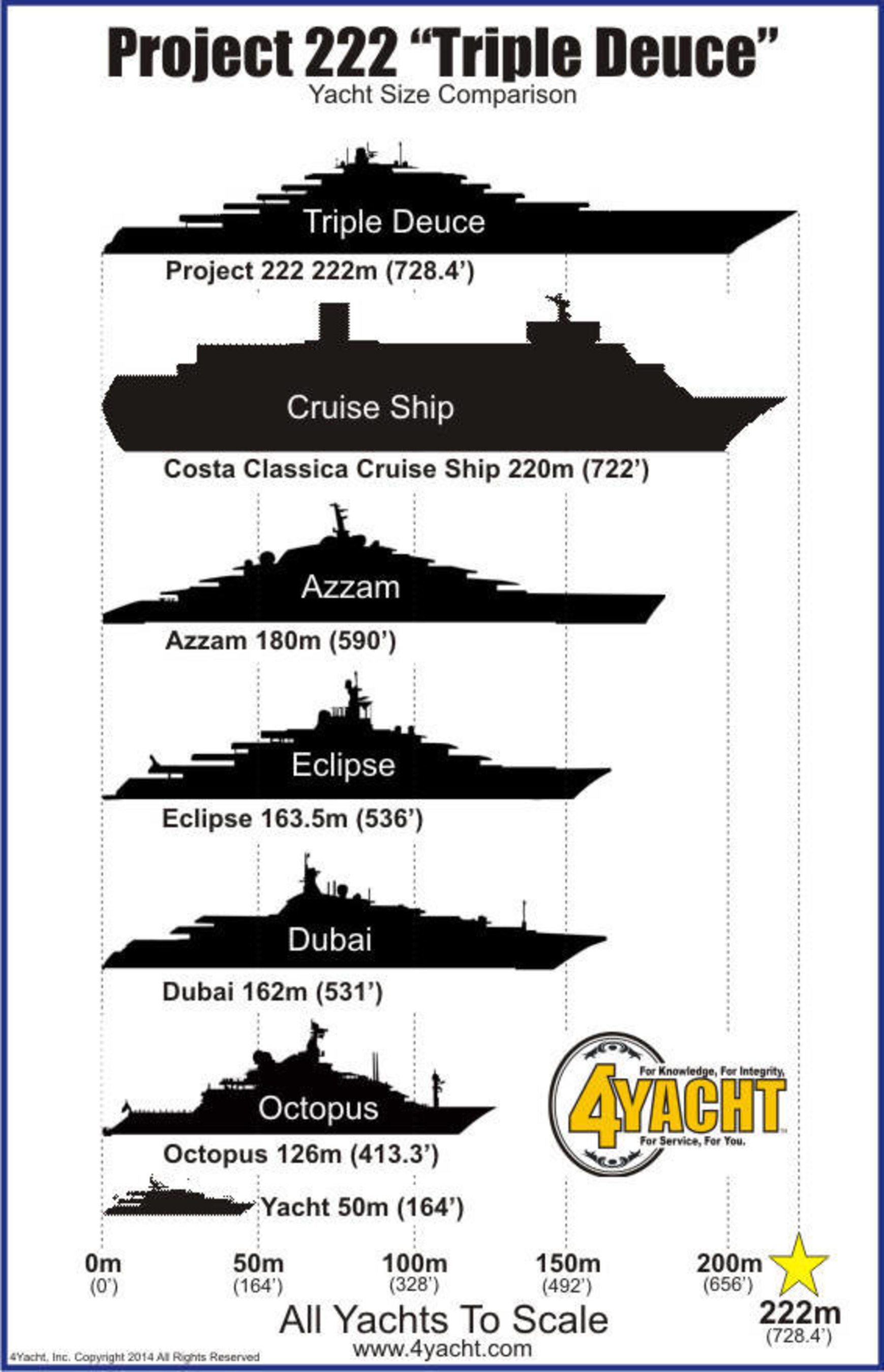 It is just like the competition that is currently affecting mass cruise tourism where mega cruise ships are being built that are ever larger and more competitive to always accommodate more passengers at a time to offer cruises at increasingly tattered prices. Only in this case there are big interests in a sector that has been growing rapidly for years.

The demand arises spontaneously but it will also be functional a yacht with this size a holiday means freedom and easy access to all the best beaches in the world.

Of course, a yacht of this magnitude can not enter all the ports of the world. It would be a private yacht with the same restrictions as a mass tourism cruise ship that carries even thousands of passengers with hundreds of crew members and moors only in ports of considerable size that usually coincide with those of large maritime cities.

What are the pleasures of having a private yacht if not to plan wonderful trips and to reach all the places of the world even the most remote. Maybe then through a beaching tender on the most beautiful and distant beaches and explore the most characteristic coves. This is the logic but obviously between super rich it does not work exactly like that. 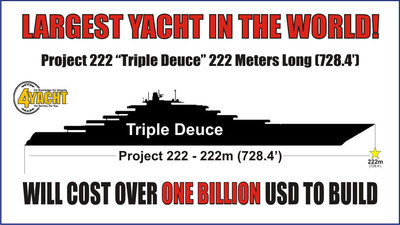 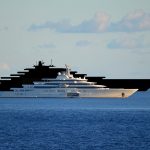 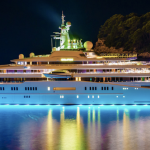 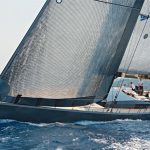