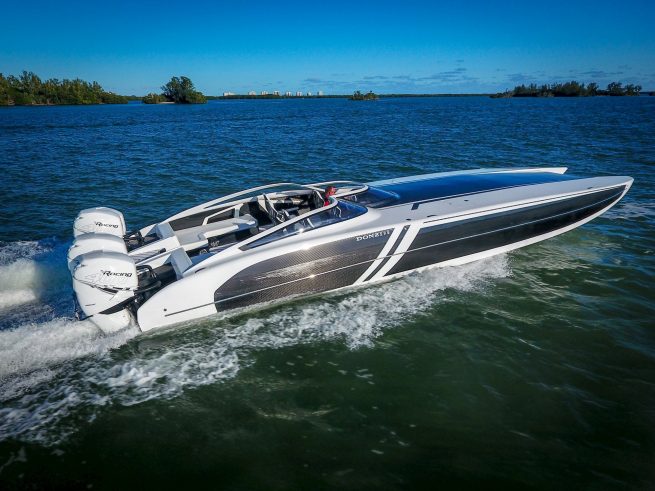 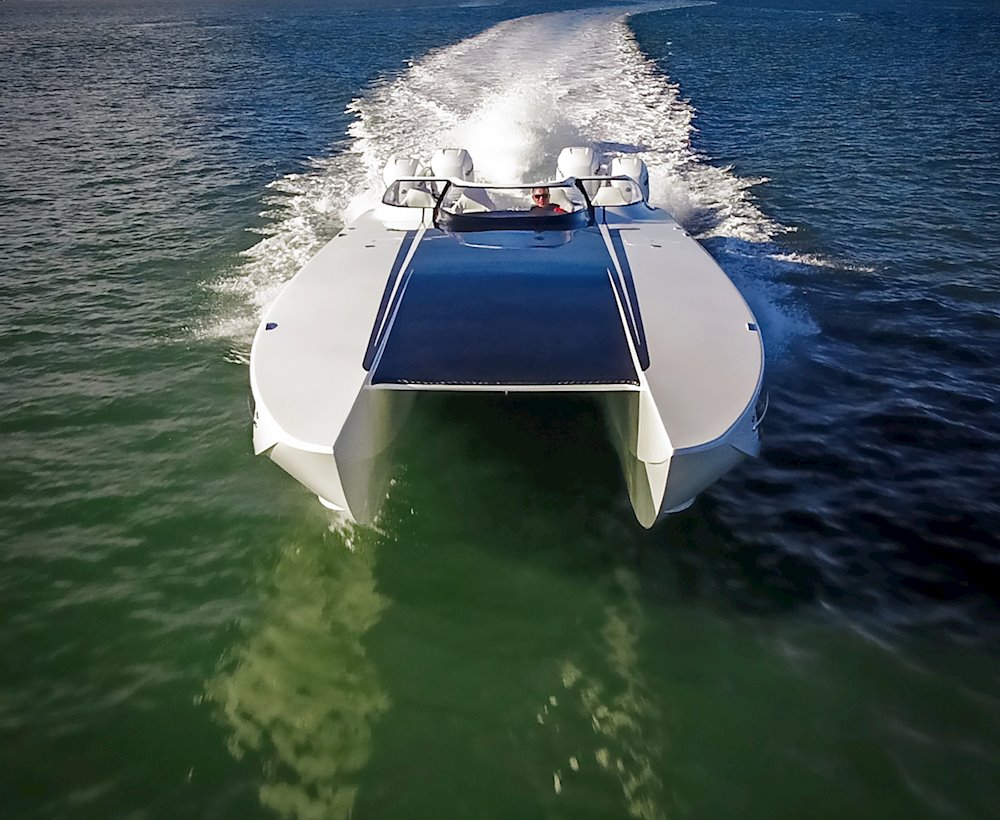 Monohulls have always been aesthetically attractive boats and almost all the designers passed and still spend most of the time today to design a boat that is beautiful to look at first, then the fact that it is good for sailing or for engines comes immediately after.

Multi-hulls instead in the past for their clumsy image and for an aesthetic perception not beautiful have always had a limited importance in the market of pleasure craft. 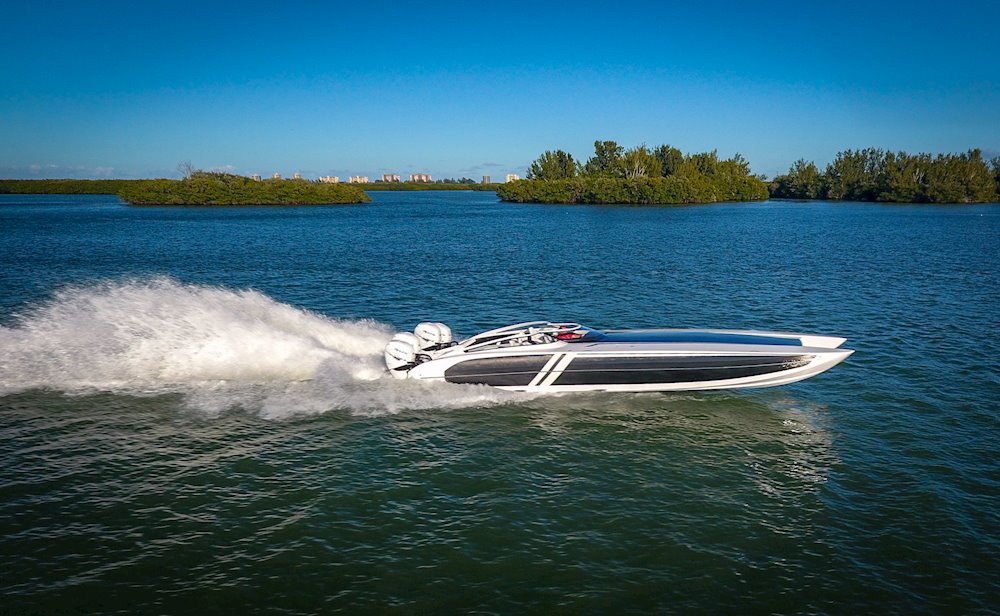 Furthermore, with the development of modern construction technologies and new materials such as carbon fiber and composites, it has been possible to create increasingly compact, light and resistant catamarans and their evolution is leading to the construction of interesting boats that are finally able to always satisfy more every type of clientele, both cruise passengers and water speed enthusiasts. 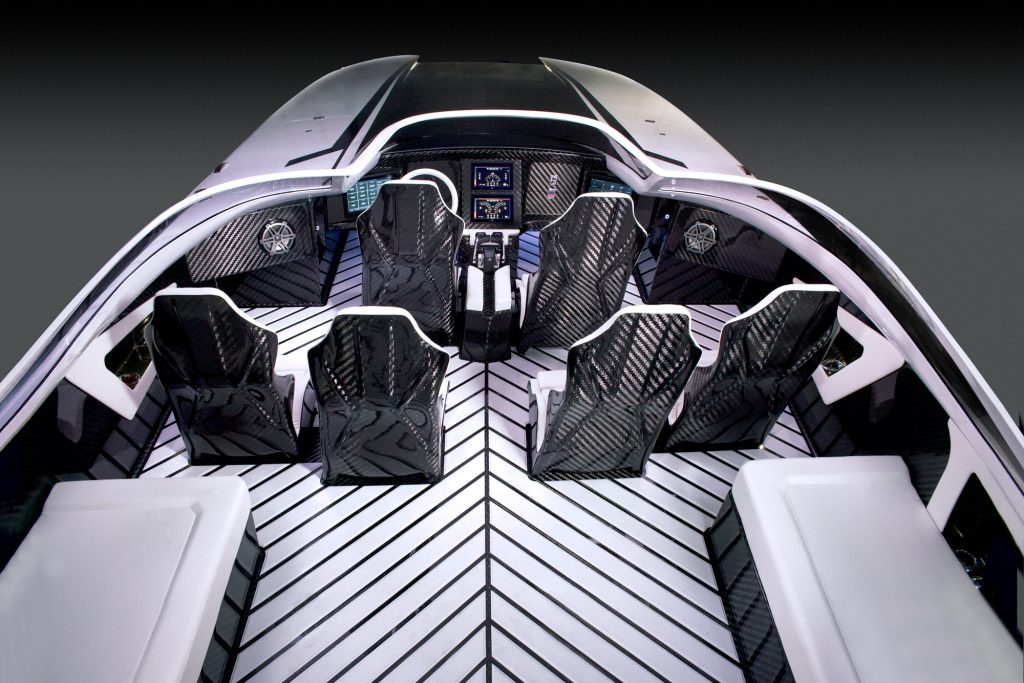 In speedboat racing competitions such as Class 1 of the Offshore World Championship that takes place offshore, catamarans are used which, in addition to allowing high speed to be reached, have exceptional maneuverability.

Iconic Marine Group, the parent company of Donzi Marine which has been building standard boats for water speed lovers for 51 years, could not help designing its first luxury catamaran and at the last Miami International Boat Show presented its brand new creation Icon 44, a 44 foot (13.40 m) and 12 foot (3.60 m) long catamaran built entirely of carbon fiber. A new outboard driven by four Verado Mercury Racing 400 engines of 400 hp each that allow the boat to overcome the speed of 104 knots equal to 120 mph with six people on board. 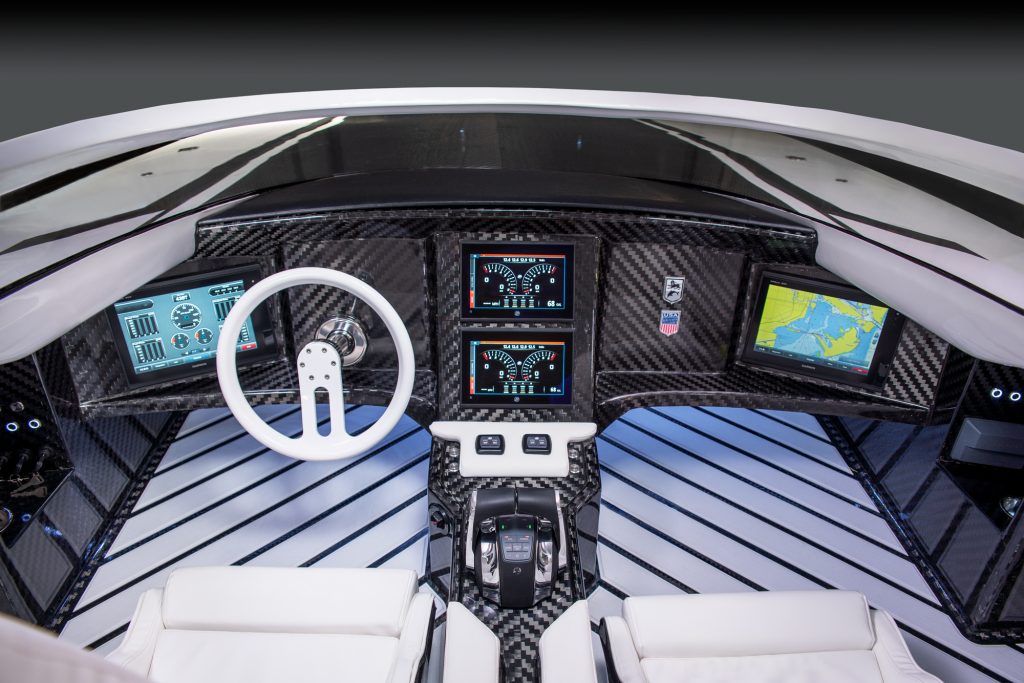 The first Donzi-branded cat is characterized by an innovative, modern design, where luxury, comfort and performance are perfectly integrated and designed and built in collaboration with Wilson Composites of Fort Pierce, Florida whose owner Craig Wilson is that in addition to being a marine specialist is also a three-time world champion powerboat pilot and three-time national champion with extensive racing experience. As a marine propulsion specialist he uses his knowledge to get the best out of boats. A well-known figure in the world of high performance.

In addition to his world champion racing skills, Craig also has an advanced education from schools attended in England, Switzerland and the United States of America. 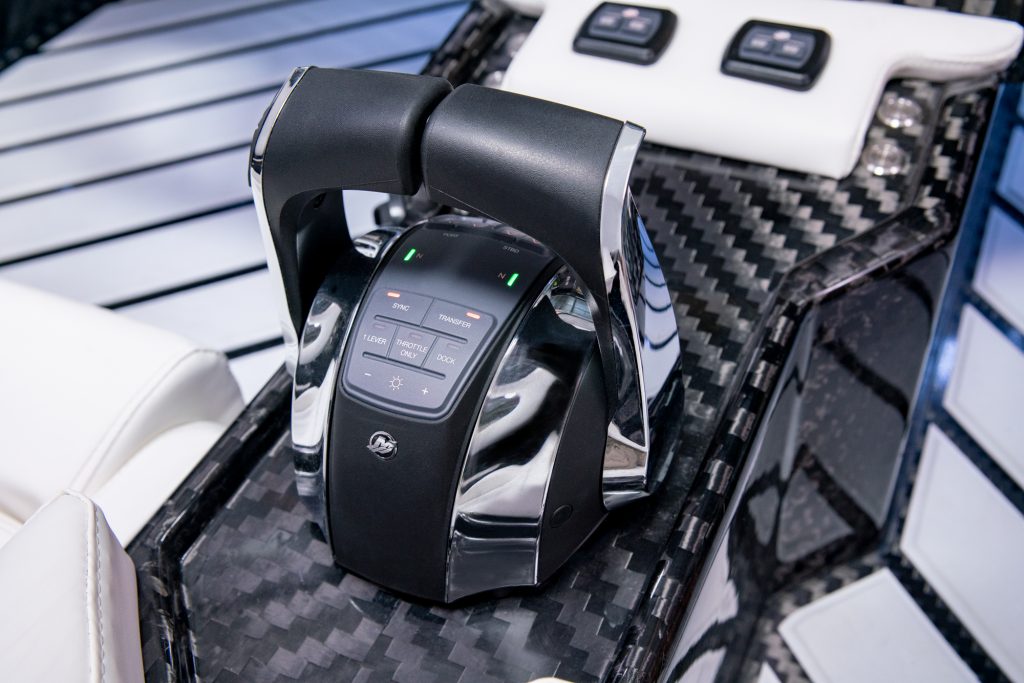 Craig designs the catamarans and then has them made by his company with a very advanced infusion system that produces ultra light and resistant hulls.Therefore Joe Curran, former chief operating officer of Donzi, who died on 11 March 2019 at the age of 55, had certainly asked for a valid collaboration for the realization of the first catamaran of the brand.

The multihull was produced with advanced composite materials including infused carbon epoxy resin and a new foam core that forms a honeycomb pattern. Craig Wilson said the core is 10 percent stronger and 40 percent lighter than the nuclei currently used by most manufacturers. 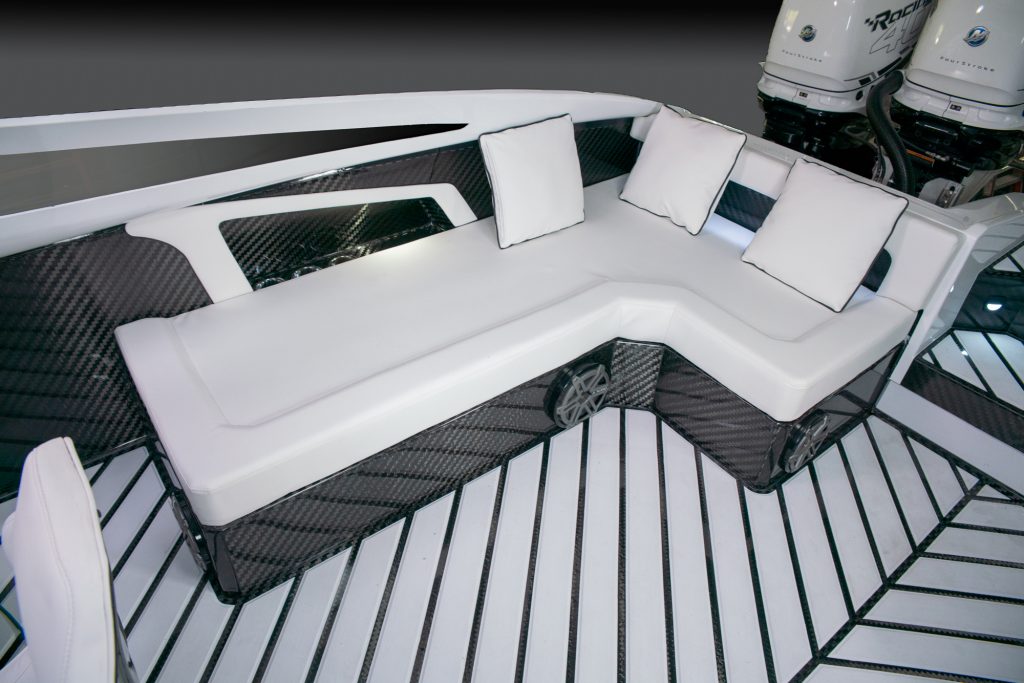 “He’s more of a luxury cat,” Wilson commented. “It’s light and should be less than 8,500 pounds. It was designed specifically for the four outboard engines. “He has a very nice swimmer’s step up to the water. The tie will be under the step that extends 3 inches beyond the motors. The target speed is 120 mph with six people on board and a full tank of fuel. “ 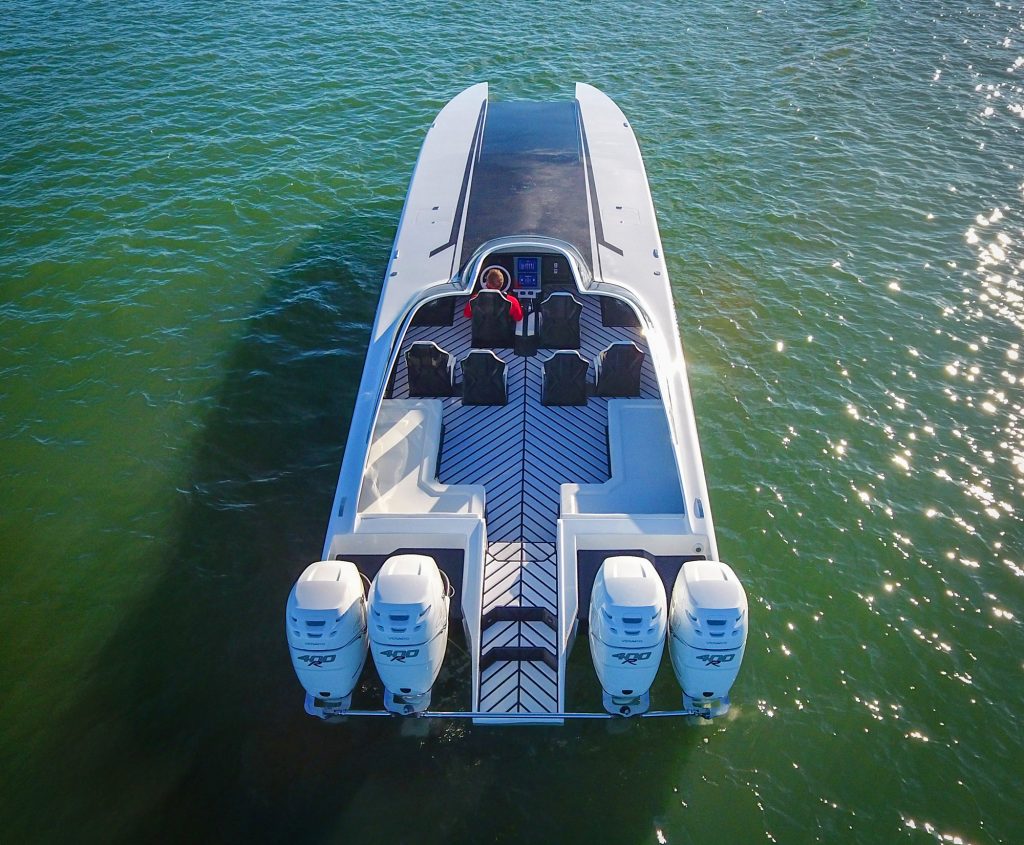 The layout and the distribution of the spaces were really brilliant and the aesthetics is also very exciting and fascinating with a very sophisticated minimalist exterior design that benefits from the alternation of black and white colors for the material used, creating an overall atmosphere. that tastes clean, fresh.

On the seadek non-slip flooring all the six special anatomic seats with the high back all in carbon are highlighted. The driving position has all the characteristics of those of offshore there are two central seats for the pilot and co-pilot protected from the wind by a wrap-around double-curved windshield that tapers sharply towards the stern that protects all occupants of the boat. Just behind there are the other four seats in a row amidships with a great view ahead. 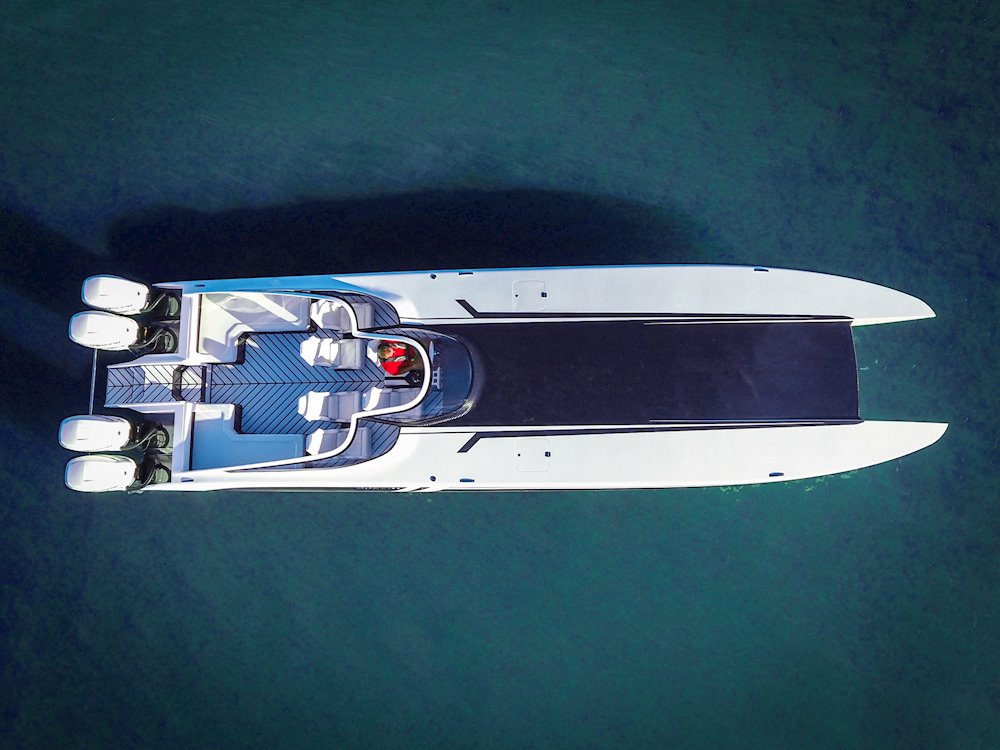 The back of the boat is a real novelty with plenty of space available and has been designed with luxury and maximum comfort in mind. Here there are two L-shaped lounge seats that extend aft along the left and right side with a step in the center to provide a meeting area for guests where they can sit, lie down and socialize or simply recover after adrenaline rush that you take during the water race. 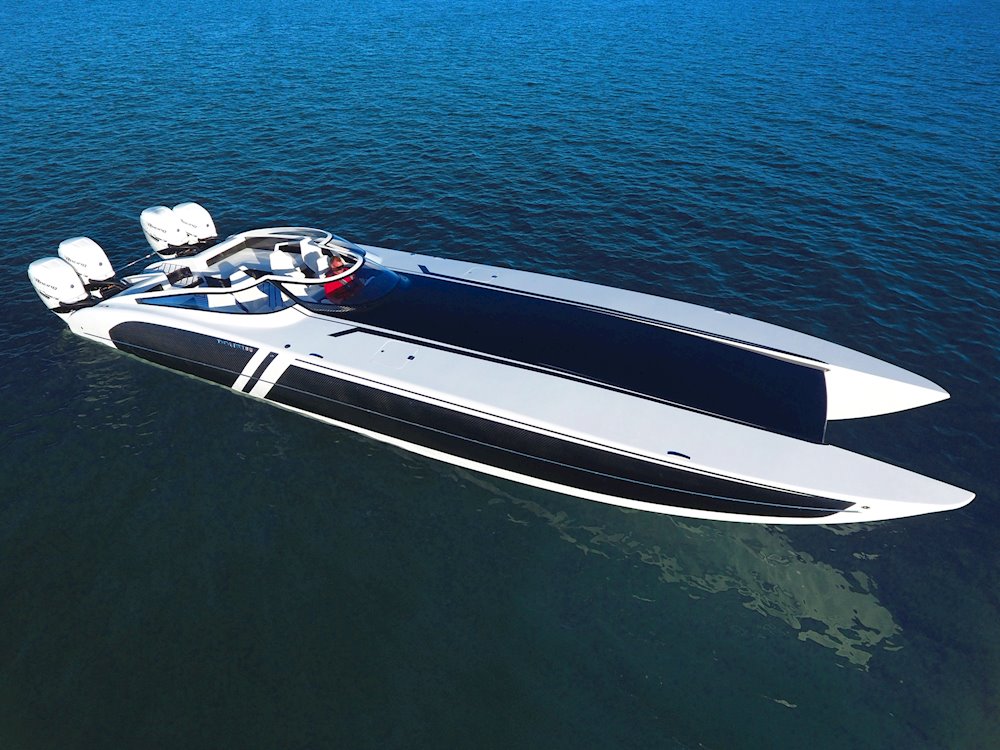 The four engines installed at the end of the transom are mounted two at a time to the left and right of the hull to allow an easy central passage to the swimming platform and create an area that is comfortable to exit when the boat is at the dock. The Donzi Icon 44 was equipped at the highest levels and assisted by the Garmin and Mercury electronics. The price of the boat with the configuration described is around $ 950,000. 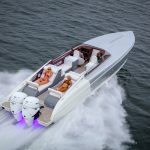 THE BOLIDS OF THE SEA 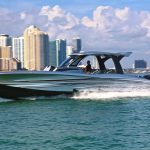