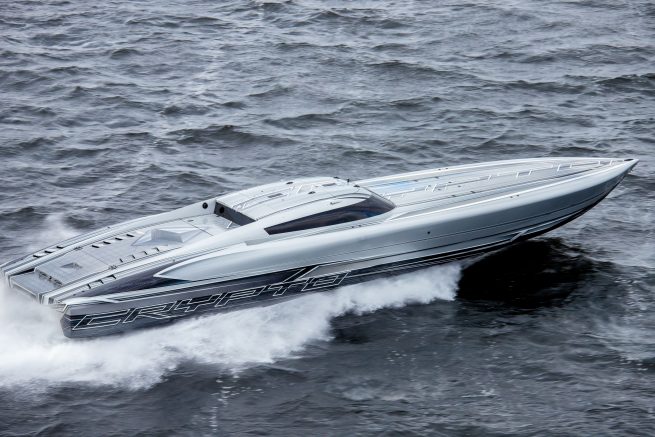 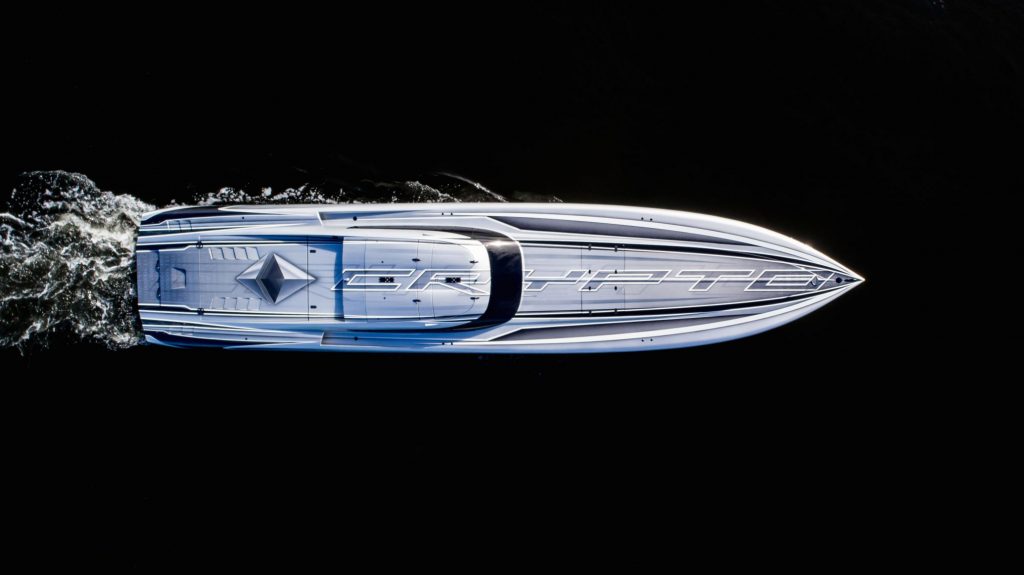 A niche, that of high-performance boats available only for wealthy very demanding customers who recognize and desire the absolute best in performance, style, good taste, design and workmanship. Starting right from the details such as the emphasis of the seams, the search for leathers, the contours of the upholstery that must coordinate with the colors of the boat, the high-tech instrumentation and the functionality of each single element, everything must be done with perfectionism and scrupulousness with a manic fussiness. All elements that then must reflect the personality of each individual customer to make the character of a boat singular.

Outerlimits is the American shipyard that has as its vocation to build personalized fast boats and for 27 years has been committed to satisfying this particular market niche where customers love to exhibit their boat both on the sea and at the pier with great satisfaction to show off with fun a good chunk of their success. It is a privilege for few fans of speed on the water to own an Outerlimits boat and for those who can enjoy it both to race in an offshore circuit or simply spend a day with the family.

Outerlimits manufactures stepped and ultra-light V-shaped stepped hull boats because it uses exclusively post-vulcanized epoxy resin in carbon fiber in all boats, which, even if stressed in extreme situations, can always maintain their integrity even in conditions of rough waters .

Outerlimits Offshore Powerboats was founded in 1993 by Mike Fiore based in Bristol a city in the United States of America, in the County of Bristol, in the State of Rhode Island, who passed away in August 2014 at the age of 44 following a boat accident on Lake Ozarks Shootout.

Mike is the son of the founder of Hustler Powerboats, Paul Fiore, famous for having brought the technology of the stepped hull into the modern era of high performance boats, unfortunately he also died suddenly at the age of 76 in November 2019. 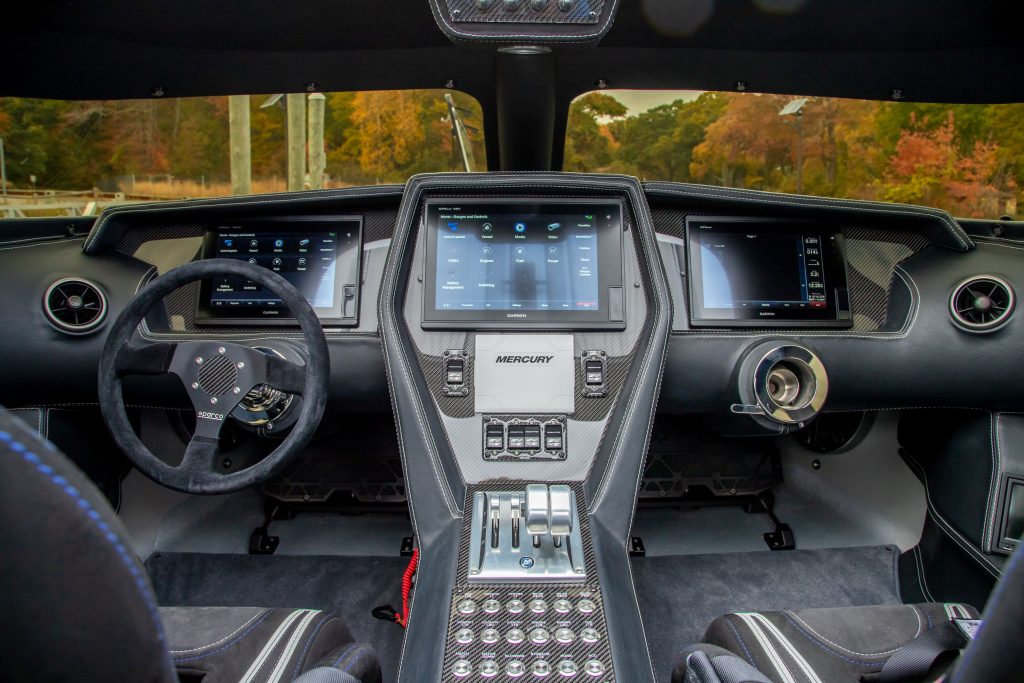 Mike Fiore started working with his already famous father since adolescence learning the whole activity, personally doing every job with the intention then to start up on his own and offer something more than others in the sector. Building boats has always been his true and only popular passion, his following statement remains:

“There is nothing else I really want to do except get up and build boats.” “If I win the lottery tomorrow, I would do the exact same thing anyway. Nothing would change. It will be so I am sure until the day of my death ”.

After Mike’s death, the company was initially managed by Joe Sgro, Mike’s friend and business partner who also died for a tragic fate four years later. Now the company is headed by Dan Kleitz who was Mike’s first arm and then Joe’s right hand and over the years has learned and gained a lot of experience in the fast boat business. However his passion for high performance boats began long before he arrived at the company. 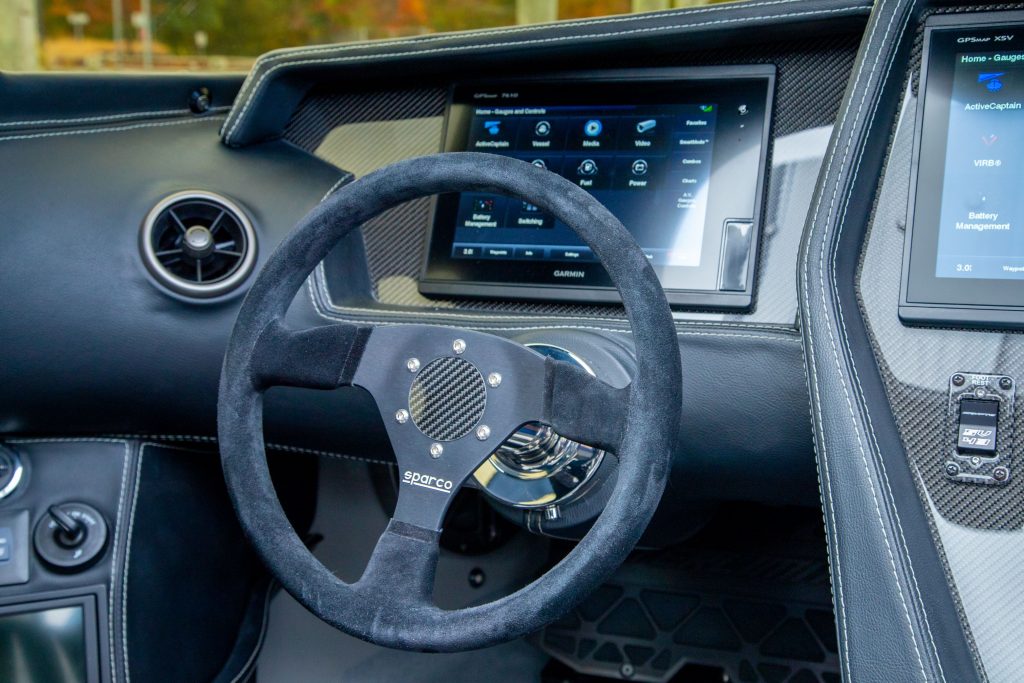 In this regard, Dan Kleitz made the following comment:

“I learned everything from him, from how to drive a boat to how to set up a boat to how to build a boat. Mike was my mentor. He took me under his wing. And when he was at his home in California, he told me everything that had to be done in Bristol through me. “ 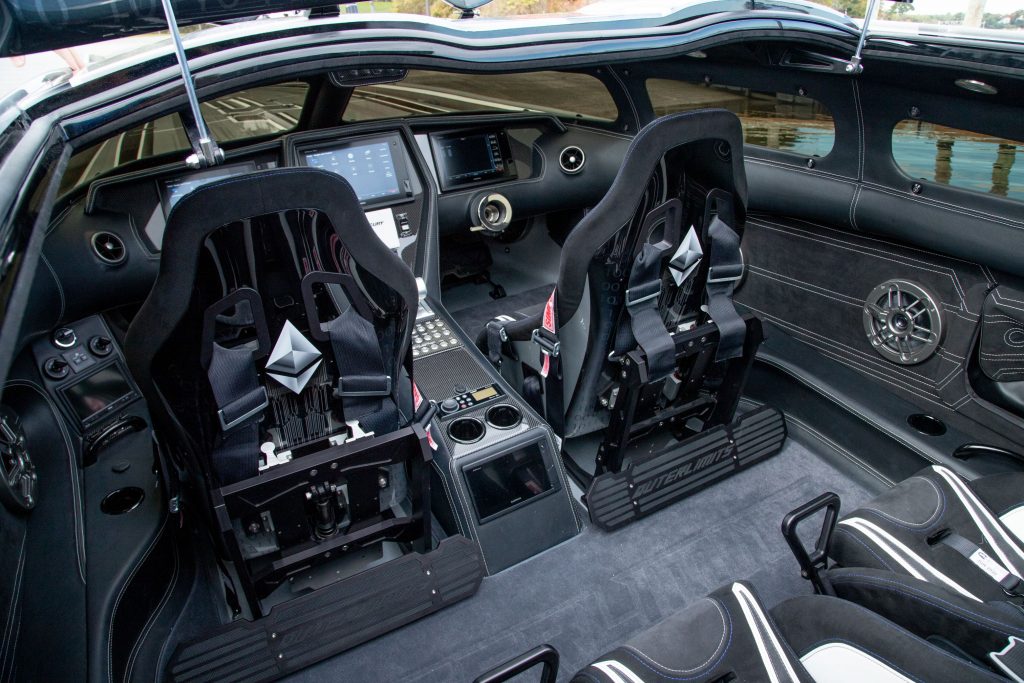 This model creates sensations of speed on the water from sight to sound like no other. An exceptional V-bottom boat that is powered by two staggered Mercury Racing 1550/1350 inboard engines easily exceeds 180 mph. The current model has a completely innovative cockpit cockpit configuration compared to the past because you have the option of choosing or navigating or rather darting on the water with the cockpit closed with air conditioning or fully open.

The cockpit can accommodate up to five people with 2 wraparound seats forward and immediately behind another 3 for passengers with ample legroom. All seats are adjustable and reinforced with seat belts. The soft ride has dual rudder controls, and a dashboard with high-tech instrumentation. 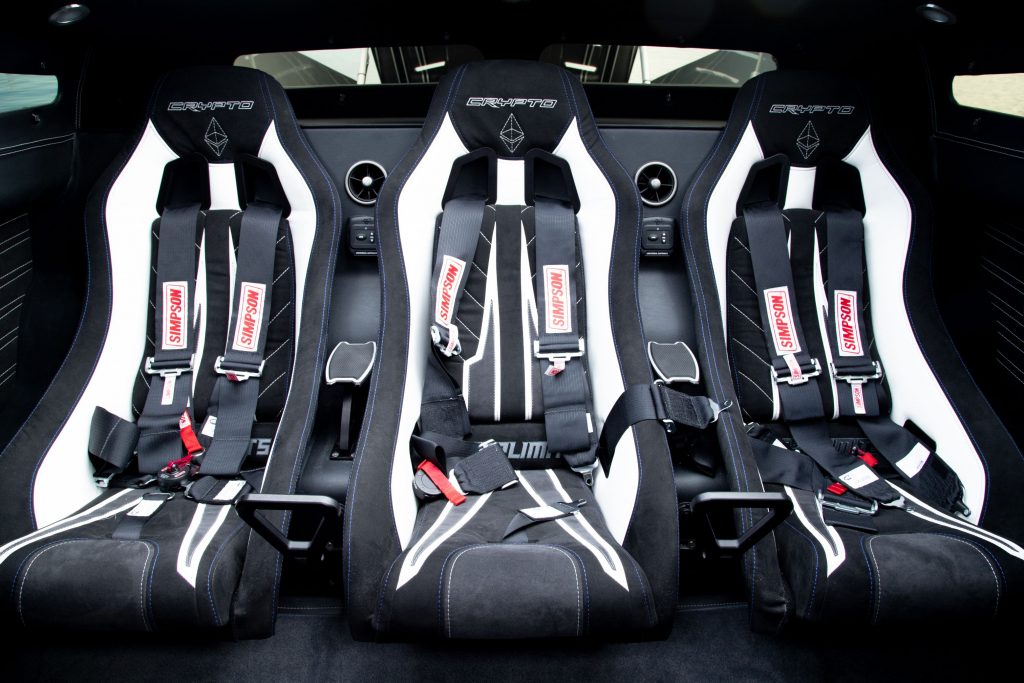 This is not what makes the difference compared to similar models from other competing manufacturers, but it is its safe and graceful impetuous way of advancing on water along trajectories and curves, with exceptional stability. The super-motorboat rises on the water and minimizing the wet surface it seems almost suspended, resembling more a space vehicle than a marine one.

SV 43 is a unique water rocket and with both today’s engines and those installed in the first 2008 model it always runs at an emotional speed to demonstrate the quality of the late Mike’s design. 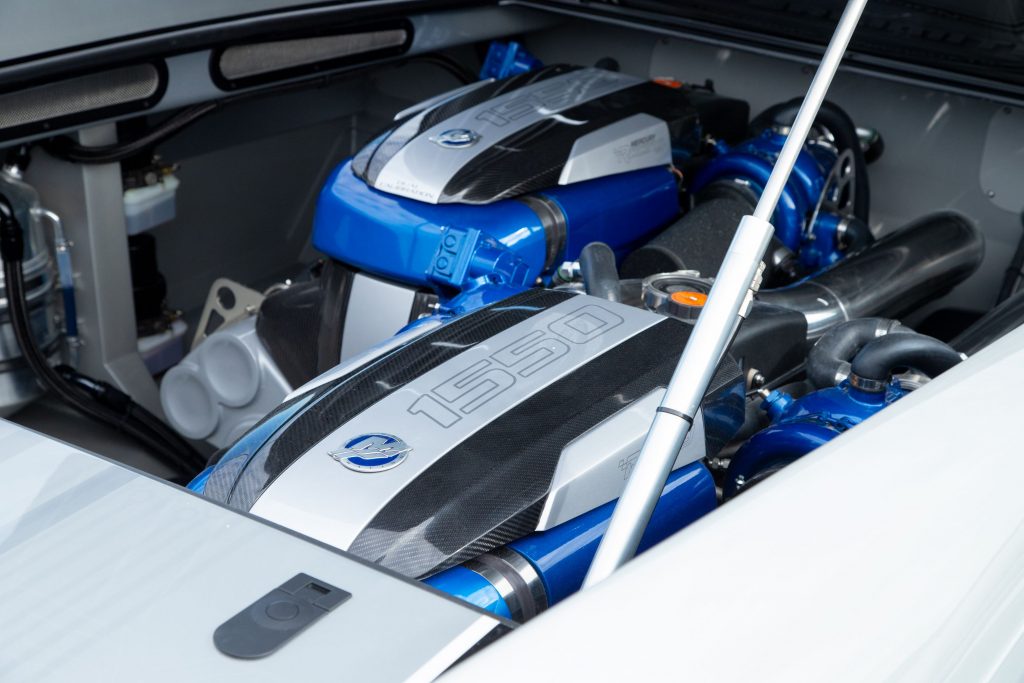 Dan Kleitz has made the following statement regarding this boat:

“There are so many great details in this build. It has a unique carbon fiber dash with three Garmin GPS screens and a digital switching system and manual switches. Five-point constraints are provided for all bucket seats and the buckets of the driver’s and co-pilot’s suspensions are mounted on solid billet brackets. The driver and co-pilot also have footrests machined from solid. The canopy has Tiger latches. Absolutely no expenses were spared in this build of this boat. It’s incredible.” 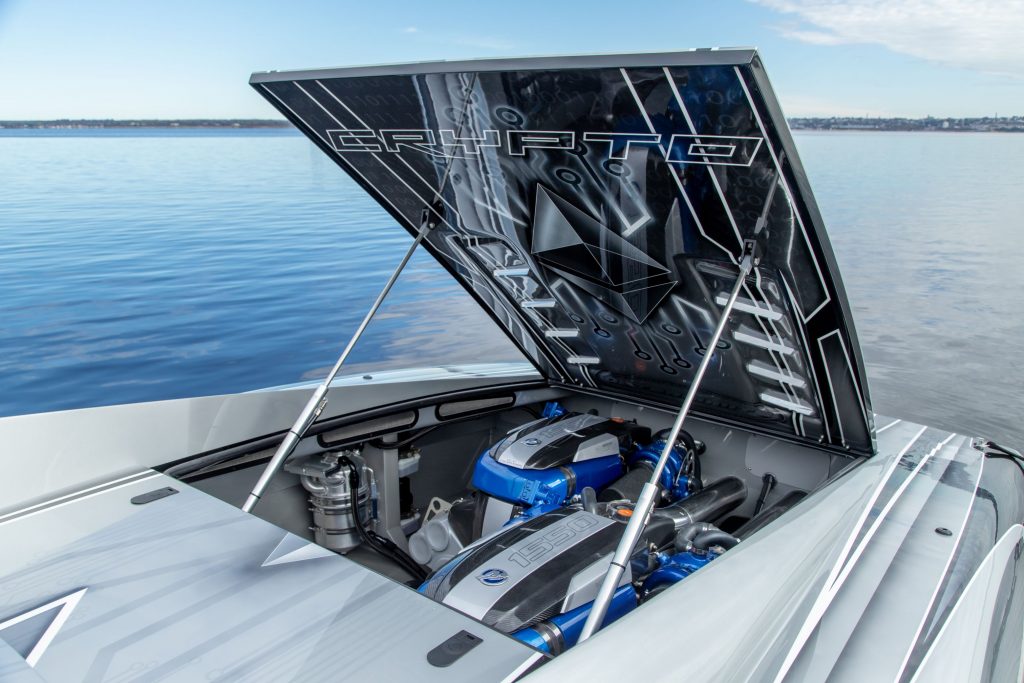 Furthermore Stephen Miles of Stephen Miles Design in Owensboro, Ky who took care of the painting of this super motorboat, which he said was one of the most demanding projects he faced, commented as follows:

“It took about 60 calendar days, which is five guys who work 10 to 12 hours on each of those days. They are basically different shades of gray, silver, black and white. All that binary code and chain graphics you see in the design on the deck and sides of the hull are made in different blends of fine pearls, coarse pearls, ice pearls and metallics.
“Once you get close to it, there are miles and miles of detail to see. “ 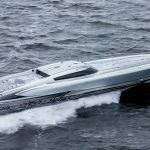 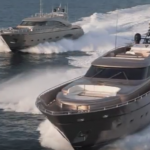 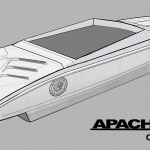