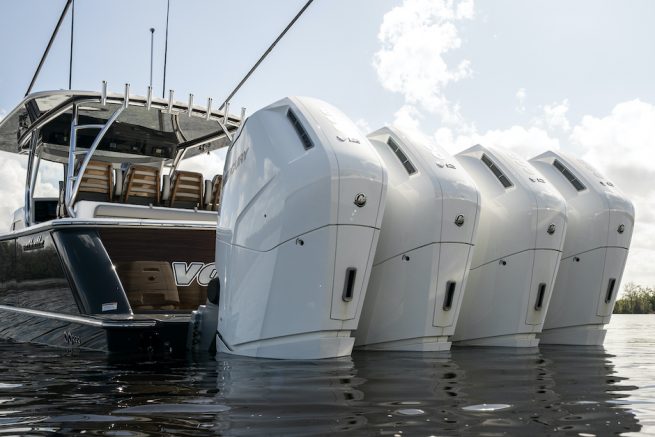 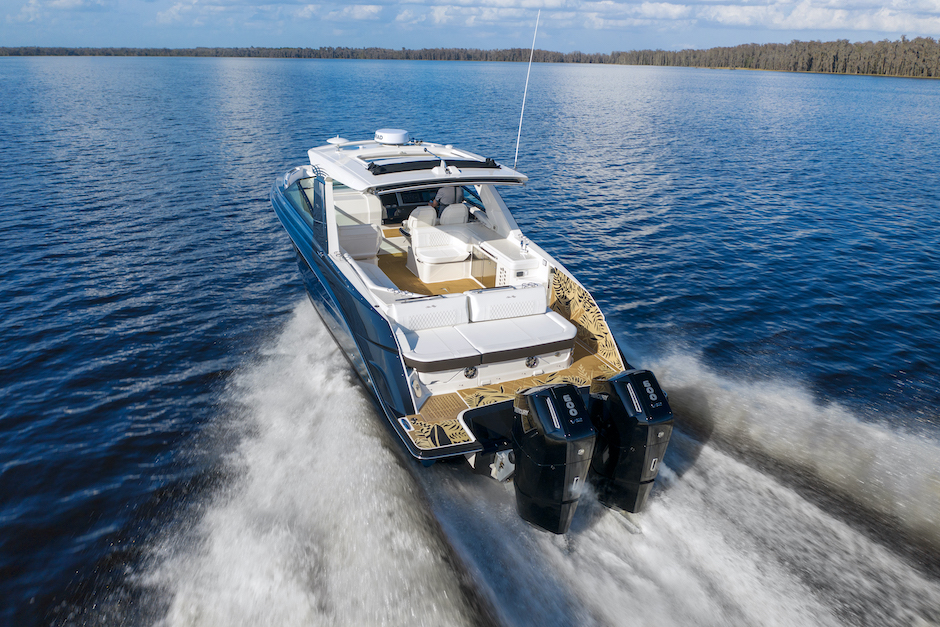 In recent years, we are witnessing a real revolution in the nautical market, especially for the maritime leisure sector, because more and more owners are asking for bigger and therefore heavier boats, powered by outboard motors.

For these reasons, over time, manufacturers have developed increasingly powerful outboard motors, electronically controlled both individually and inserted in one of the multiple applications where two, three and even four or more outboards are installed.

Thus the outboard motors that until recently were used to power boats with a maximum length of 10 meters are now used to equip much larger boats, to satisfy an increasingly demanding clientele that asks for more and more performing boats with more space on board. .

Power and control were the main elements that characterized the development of these engines. At present there is fierce competition between the big manufacturers. Just two years ago Mercury Marine released an outboard motor, the Verado 450R, with an incredible 450hp as a response to the new competitor’s outboard motor of late 2018 Yamaha’s 425hp V8 425 XTO Offshore. 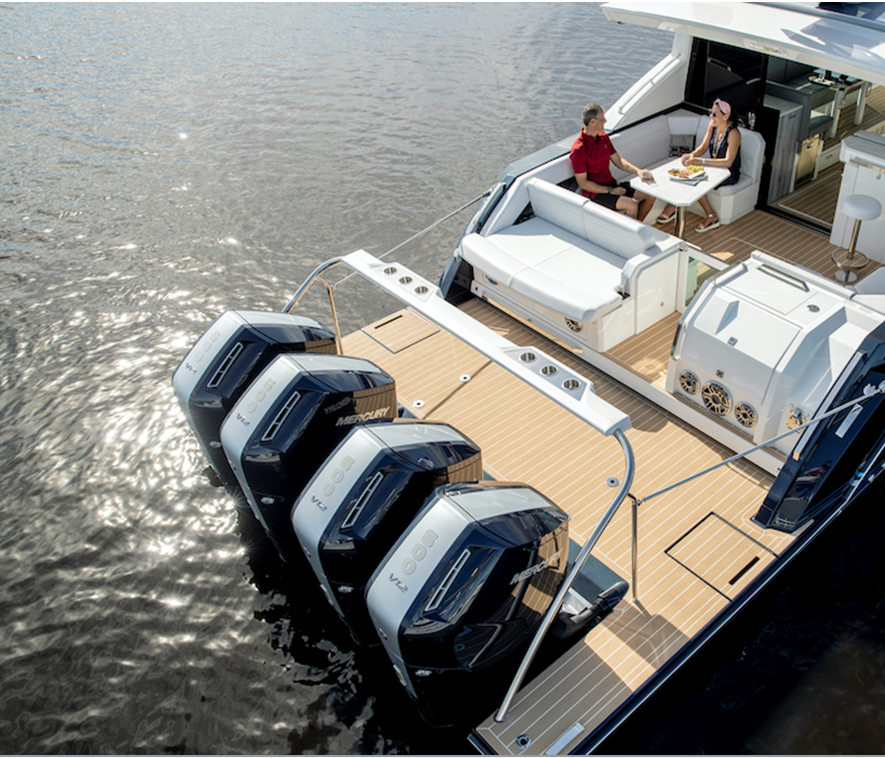 Not happy, Mercury Marine has announced through its president Chris Drees, that it intends to put on the market this year 2021 a new outboard engine, again from the Verado range, the 600 hp V12, the most powerful built by Mercury Marine, second in the world for power only Seven 627sv with 627 hp now no longer in production since the beginning of the year 2021 by decision of the new management of the Volvo Penta group of which the American manufacturer with powerful outboards Seven Marine has been part of since 2017.

Although in truth we must say that the Seven 627 was developed by transforming a car engine into an outboard engine while the 600hp Verado V12 was immediately designed for marine use by introducing many innovations that are not just about power. 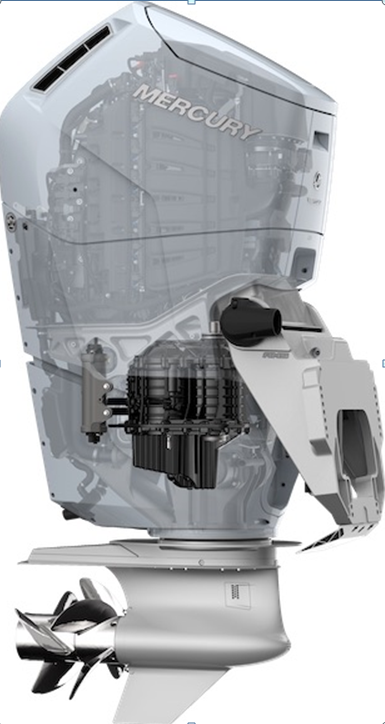 In this regard Chris Drees has released the following statement:

“Boats are getting bigger and bigger and consequently the expectations in terms of performance are growing more and more: this is why yachtsmen are looking for more efficient and performing high-power solutions to meet their needs. The Verado V12 outboard is Mercury’s answer ”. “With our advanced design capabilities, we have revolutionized the concept of performance in outboard engines. The Verado V12 offers boaters an unrivaled level of freedom, elegance and power, enabling them to cultivate their passions on the water. It is an extraordinary engine that will change the future of navigation ”.

Just two years after the launch of the Verado 450R the new Mercury Marine Verado V12 600 hp engine will be made available to the market very presumably in the summer of this year 2021, the most powerful series outboard in the world now under construction after suspension most likely final production of the Seven 627.

A surprising result that highlights Mercury Marine’s commitment to investing in development and research programs to constantly develop new and increasingly powerful engines to expand its range of products that it readily makes available to the market. 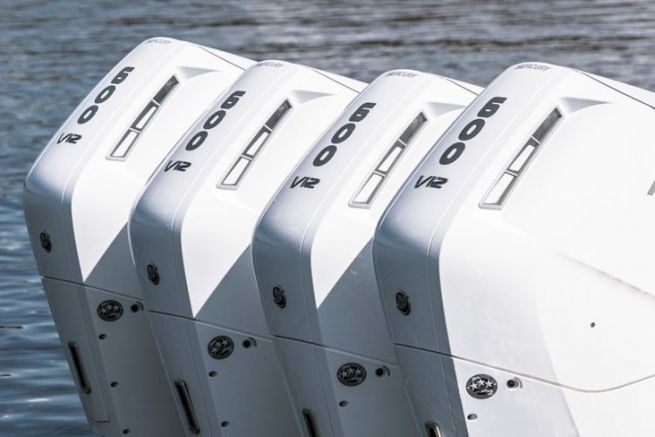 “We have invested significant amounts and years of work to increase our ability to transform highly creative ideas into practical, functional and reliable solutions”, “This commitment has put us in the ideal condition to anticipate and respond to market changes. We have paid close attention to the needs and wishes of yachtsmen, and we have created new products with the aim of exceeding their highest expectations ”.

Let’s say right away that the new 7.6-liter, 600hp Verado V12 outboard motor is the most powerful and versatile series-built engine in the world currently in production but also the heaviest in its category.

For this engine, Mercury has changed its design parameters which it has maintained until now, namely that of making engines with maximum power with minimum weight. This new engine has been built through a series of innovative features that broaden its use which reduces the line in competition between outboard and inboard and sterndrive engine manufacturers.

In fact, the Verado V12 600hp has been built to be the best outboard in the world that inserted in one of the multiple applications that require installations even two, three, four or more outboards are able to push boats with a certain tonnage with exceptional performance. 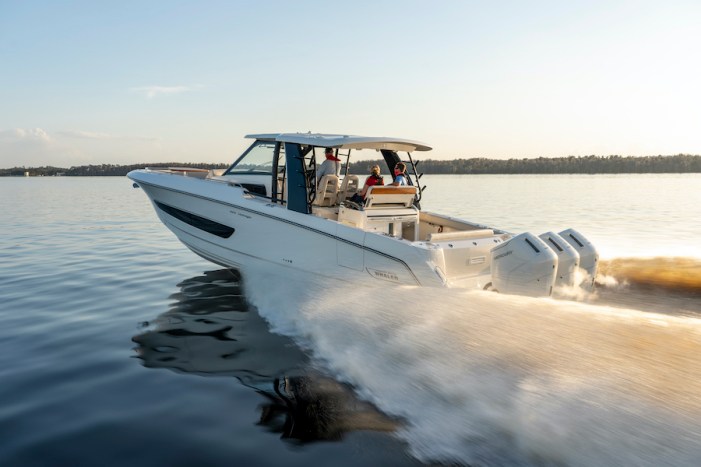 “The Verado V12 is a high horsepower outboard capable of giving boaters everything they want, and more. This engine makes the boats easy to maneuver in the vicinity of the mooring and improves handling at all speeds “.

It boasts an incredibly high range, which allows boaters to go farther and sail longer. It is so smooth and quiet that conversation is possible while the motors are running. It is durable, reliable and easy to maintain. Verado V12 is unmatched on the market today, ”commented Drees.

The Verado V12 600hp is the first V12 outboard in the world, equipped with a high displacement aspirated engine block with double camshaft where the V-design has been built on a block with a narrow angle of 64 ° to be able to a displacement of 7.6 liters in a very small volume, to save space on the transom to allow the addition of other outboards. With class-leading displacement (7.6 liters) and double camshafts they develop exceptional torque, thanks to which even the heaviest boats easily reach planing speed and cruising speed with uncompromising reliability. 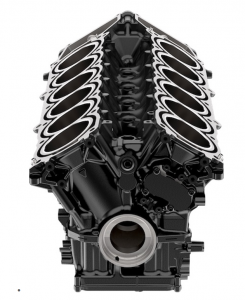 The management of delivery and control of this enormous power has been entrusted to a two-speed transmission that changes automatically and transmits all 600 hp to the foot of the engine without problems and distributes the maximum torque and acceleration in first gear and then passes to the second, ensuring efficient navigation and incredible top speed.

This two-speed automatic transmission is the first installed on an outboard, the first gear is 20% lower than the second and the transition between the two gears is smooth and imperceptible.

The Verado V12 600hp outboard also sets new standards in terms of smoothness and quiet operation. It easily establishes itself as the quietest engine in its class: despite its 600hp, the noise and vibration values ​​are comparable to those of the 300hp Verado V8 outboard. 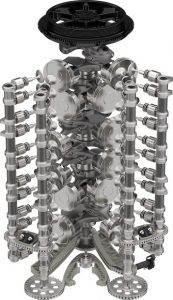 This outboard is the first in the world to have the steering foot installed that orientates independently under water, while the engine block remains firmly in place, reducing the footprint to a minimum. The electro-hydraulic controls allow the foot to react instantly to the driver’s commands without movement of the upper part of the engine ensuring precise maneuverability during mooring and extraordinary handling in navigation. This revolutionary innovation in terms of maneuverability and control can be applied independently of the outboard category. 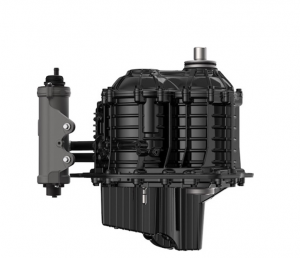 In particular, the innovative steering foot allows to widen the angle of turn up to 45 ° degrees compared to a traditional outboard where this angle does not exceed 30 ° degrees In addition to making only the foot steering, keeping the rest of the engine still. reduces the overall dimensions to a minimum opens the possibility of mounting multiple engines with the new Mercury Verado V12 600hp even on older boats with limited space on the transom. 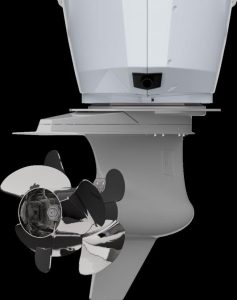 In this regard, Mercury Marine states:

“It’s easier to steer as it doesn’t move the entire 1,260-pound (572 kg) engine, just the bottom unit. There’s also a wider range of motion for tighter turns at low speeds. A typical outboard will swing 30 degrees in one direction or another while the 600 Verado’s steering can rotate up to 45 degrees. “

In addition, an ingenious new series of double propellers have been created to exploit the full potential of the 600hp. Designed to operate in counter rotation, the new propellers bring the boat on plane quickly and efficiently. Furthermore, thanks to the action of the counter-rotating propellers, the engine has more grip on the water, facilitating mooring and maneuvering in confined spaces.

Tuned to develop maximum performance with 87 octane fuel, thanks to these propellers, together with an optimization system, the cruising range recorded during the tests exceeds that of a competing high-power engine by 20%. 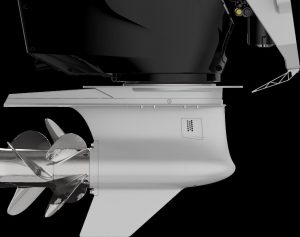 In this regard, Jeff Becker, head of the Mercury outboard category for engines over 75 HP, issued the following statement: 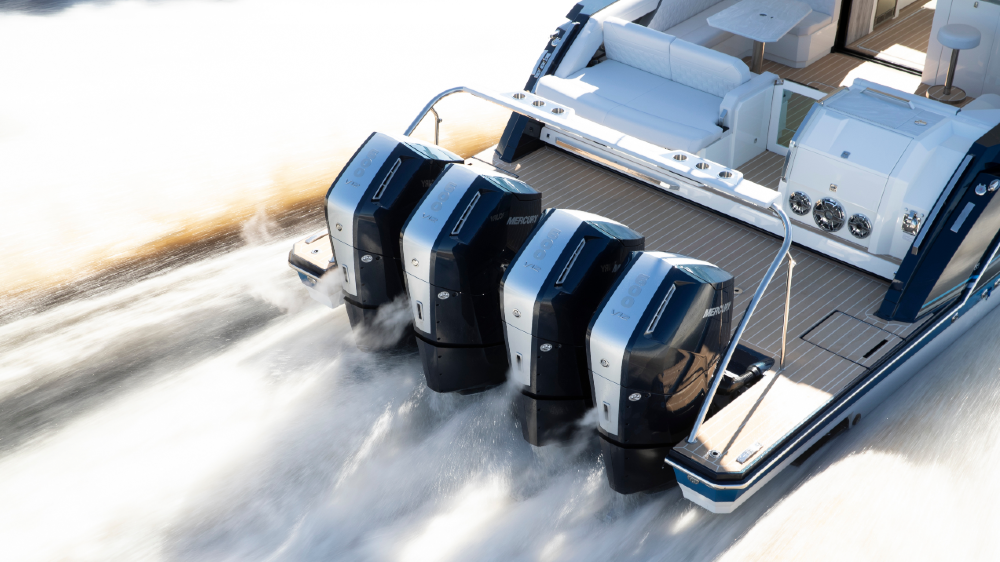 Another important feature of the new Mercury Verado V12 600hp is the doubling of the routine maintenance intervals. Mercury has revolutionized the concept of maintenance in the marine sector, so that it is no longer a problem for boaters. The Verado V12 outboard is capable of cruising for 200 hours between oil changes and initially this is the autonomy time thus reducing the need to take the engine out of the water every 100 hours as is usually the case with the other outboards. In addition, it is possible to carry out this maintenance activity directly from the top of the engine without having to take the boat out of the water, thus reducing maintenance costs. The new Mercury Verado V12 600hp is equipped with a grille that covers the engine divided into two parts. The upper part covers the head of the engine, just like the hood of a car and the other part covers the rest of the engine. For maintenance, the two parts can be removed individually to reveal either the motor head only or the entire motor when necessary. In addition, a full 1,000 hours or five years of use must elapse before the entire cowl needs to be disassembled for further maintenance.

The engine has a weight that varies between 1,260 pounds (572 kg) and 1,366 pounds (620 kg) depending on the version chosen, which depends a lot on the length of the shaft These weights, can seem high for an outboard motor, when compared for example with the same Verado 450R which weighs 331 kg. 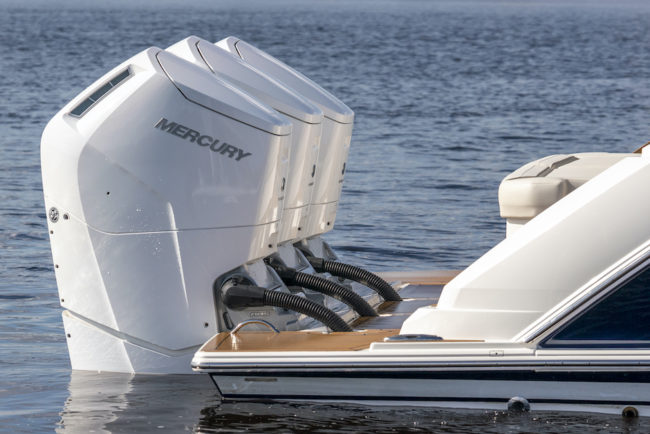 If instead we compare it with the direct external competition like XTO Offshore 425 Yamaha of 425 hp, I remember also built, to push bigger boats, the heavier version weighs 999 lbs (453 kg) this is a dry weight without propeller and without engine oil, however, the weight is much lower than the various versions of the new Verado V12 600hp.

Mercury doesn’t seem to care about the net weight of the engine because the influence is minimal compared to the total weight of the boats it will power.

In particular, the engine was tested in water on Lake X, the famous Mercury Racing test facility located in Central Florida with large boats never seen in Mercury’s long operation. For example from tests carried out on the Valhalla V-46 which is a 46 feet 7 inches (about 14 m) long 13 feet 4 inches (4 m) wide boat with a laden weight of 29,731 pounds (13,485 kg) pushed by a ‘ multiple application with 4 Mercury Verado V12 600 hp outboard motors reached a speed of 64 knots.

The same boat powered by a multiple application with 4 450R Mercury Racing engines reached the speed of 60 knots. 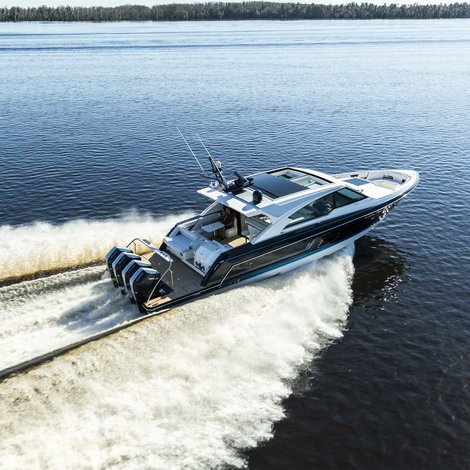 Instead the same multiple application with 4 600hp engines was used to power the Formula 500 SSC which is a 47,000lb (21,318kg) boat in less than 13 seconds reached a speed of 26 knots and then reached top speed. at nearly 60 knots. The Tiara 48 LS, a 32,000-pound hull powered by a multiple application with three 600hp Mercury outboards, reached 17 knots in 5 seconds and then reached a top speed of 52 knots.

Mercury Marine with this engine, wanted to set new standards of performance, in fact, the 600hp Verado V12 is now the most powerful series outboard motor under construction in the world with low consumption and high autonomy in a nutshell we can say that you can go faster and farther.

All this has a cost, the new Mercury Verado V12 600 engine will be sold for a figure that is around $ 77,000 23,000 more than the 450R which costs $ 54,000 while the 400R costs a little less by doing some maths. end it can be convenient to replace old lower power stern drive units with the new 600hp Mercury Racing 600R, thus taking advantage of a great opportunity to reduce consumption and maintenance costs while always maintaining performance. 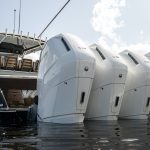 Cigarette 38 ‘Top Gun the evolution of a successful model. 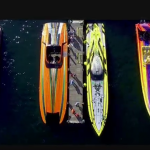 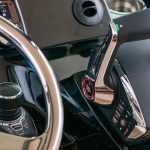