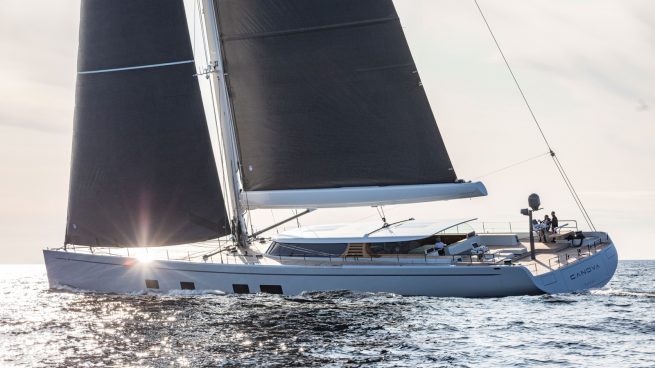 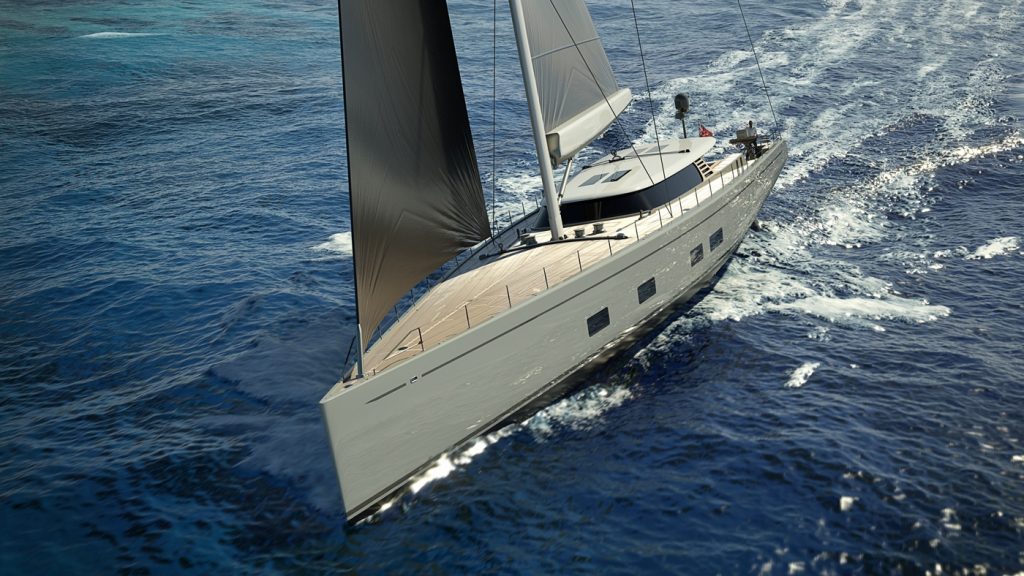 Many experts in the nautical sector say that to build an excellent sailing boat it takes a great design team, a qualified shipyard but above all an expert customer with his explicit requests.

The Baltic 142 Canova a luxury sailboat delivered to the owner in October 2019 was born precisely from teamwork, where every element including the owner contributed with their skills, which put together for a common project has created a boat destined to mark a change in all boating a truly innovative masterpiece of the sea.

The Baltic 142 Canova was quickly rewarded by winning the prize for best naval architecture in the sailing yacht category at the Superyacht Design Festival 2020 in Cortina d’Ampezzo.

A very important boating event organized by Boat International where the most avant-garde boats for design and innovation were awarded.

The Finnish Baltic Yachts shipyard engineered the boat with the collaboration of an international group of designers, engineers and naval architects and project managers. 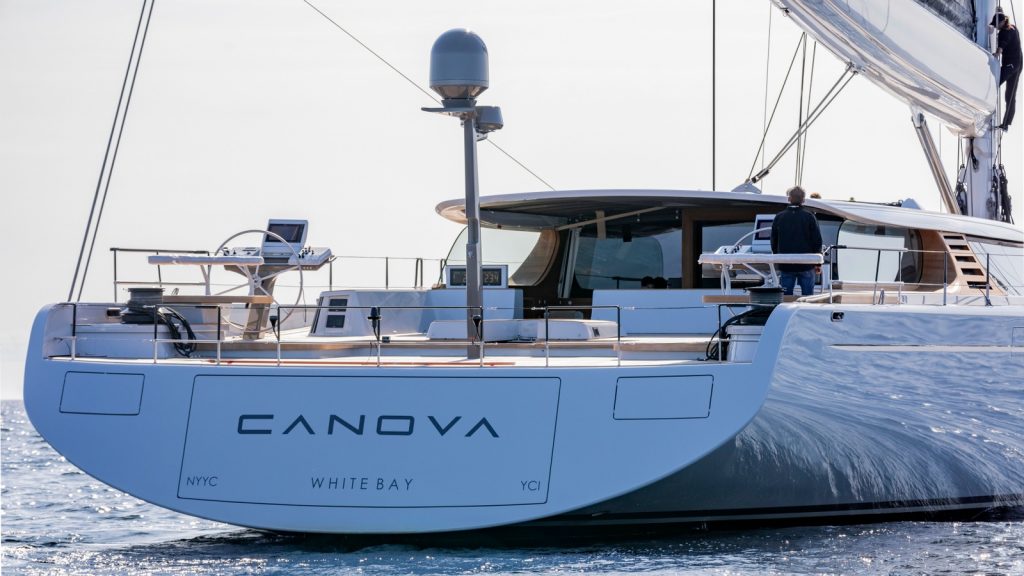 In the end, a boat rich in content was created which was highly appreciated by the operators in the sector and the aforementioned award will certainly be the first of others.

This boat was the result of a very complex project that interpreted the wishes of an intelligent experienced sailor owner, passionate about ocean navigation who already owned smaller boats and from this new larger one he asked for comfort and high technology to make sure and long stress-free cruises, with reduced crew and the possibility of doing maintenance around the world in any possible condition. At the end of the works, the owner was the first to be satisfied and now we can expect nice sailing around the world.

A sloop with the hull built entirely in carbon fiber 142 feet long equal to 43.3 meters, 9 wide with a lifting keel that can reduce the draft from 6.5 meters to 3.8 meters.

The most important elements that make this sailing superyacht unique are essentially 2.

The first is the presence on board the DSS application, the Canova is the first superyacht of this size equipped with a dynamic transversal foil of the stability system, a strong injection of technology that allows with the touch of a button to increase speed and comfort by reducing the pitch and roll movement (the annoying oscillatory motion caused mainly by the wave motion.) 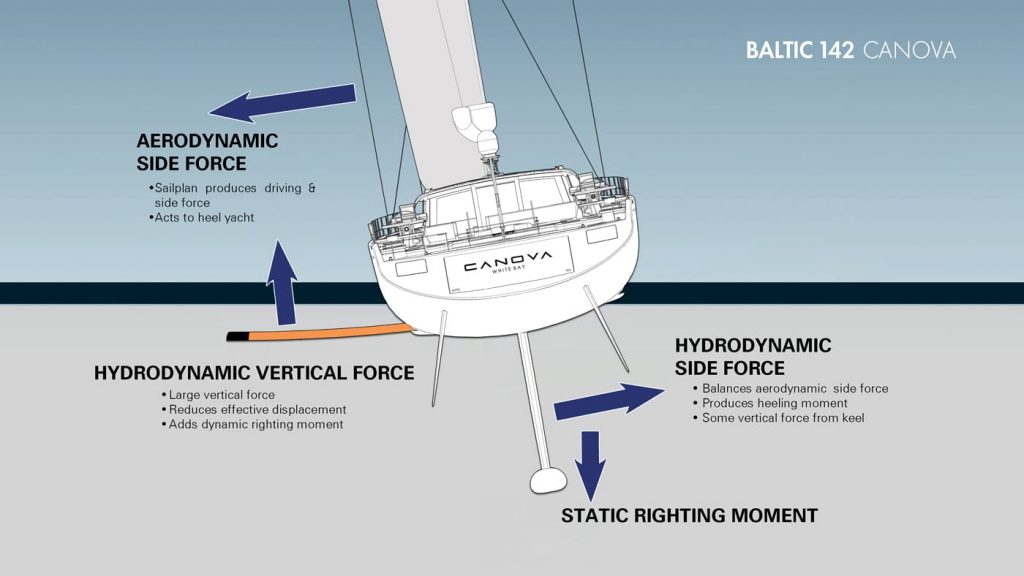 This system was developed in collaboration with Gordon Kay of Infiniti Performance Yachts, the system uses a sliding foil that can extend up to nine meters.

In this regard, Gordon Kay of Infiniti Yachts has released the following statement:

“After installing DSS in dozens of yachts, we can confidently claim to have reached another level with the flawless installation of the aluminum housing in the Baltic 142 Canova.”

The second element is a complicated electric propulsion system installed in the engine room amidships.

Propulsion when not sailing is entrusted to an electric motor, which is powered by six lithium-ion batteries charged by two generators with a production of 420 kW.

“The compact and silent 420 kW electric motor is able to drive the 145-ton yacht at a speed of 14 knots through its rotating propeller, facing forward and upwards “. 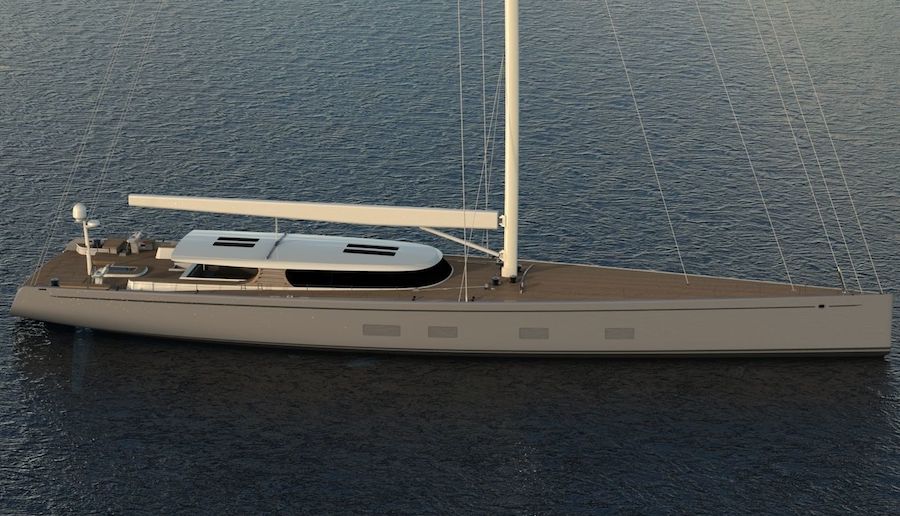 When sailing, Canova can use his propeller dragged by the advance of the boat to operate a hydro-generator, to charge his six lithium-ion batteries that have an autonomy of nine hours.

In this regard, Baltic Yachts technicians commented during the sea trials:

“The results are promising, confirming expectations for performance at sea while the electric propulsion system and hydro-generation make it more silent, comfortable and easy to maintain.” 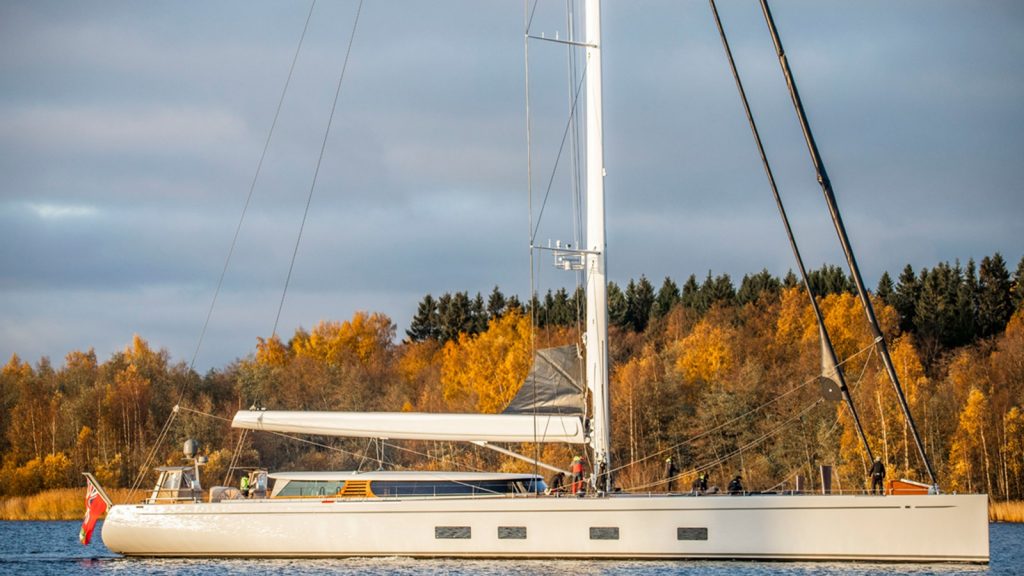 With a wind of 20 knots, in addition to sailing, the boat generates slightly more power than self-sufficiency to power all on-board utilities. Including the automated control system that allows you to manage everything with a reduced crew, including a powerful sail plan consisting, in addition to the bow sails, of a square top mainsail with a sail surface of 570 square meters, with the sail that relaxes and automatically rolls up safely in the 18-meter boom.

In this regard, the owner stated the following:

“I want you to sail, not motorized, but it must be easy for the crew to handle, so automated control was important.” 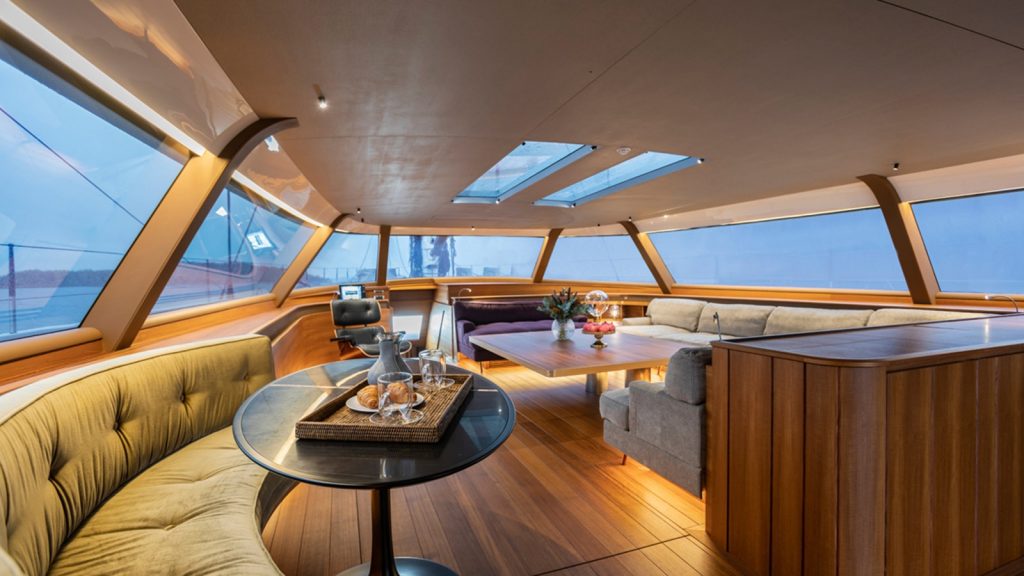 The sails are from North Sails, while the full carbon mast is from Rondal with rigging specially designed to handle the greater loads generated by the additional stability provided by the DSS film that flows directly under the owner’s cabin amidships used when the superyacht sails already at sustained speed with an estimated increase in the maximum speed which varies from 5 to 20% according to the conditions.

In this regard, the vice president of Farr Yacht Design Britton Ward commented as follows:

“The expected performance numbers are remarkable with the boat able to comfortably reach boat speed equal to the wind speed in moderate to strong conditions.” 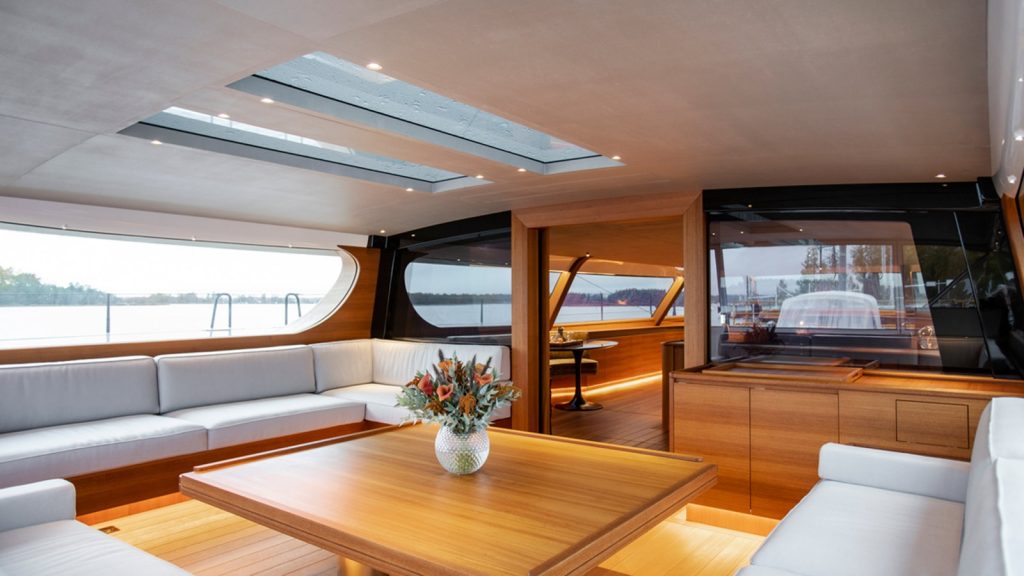 Another feature of this boat is that the superstructure, which covers the large saloon, extends with a long hardtop bimini up to cover a furnished aft cockpit thus creating a wonderful shaded outdoor space protected also by motorized windows that lower to the touch of a button, to experience the sea in the open air in full rest and safety both when sailing and when standing still.

“The idea of ​​having technology-related comfort generated a simple technological clean boat design.” So says the architect Lucio Micheletti.

The interior configuration was conditioned by the request for a central owner’s suite and a large garage aft to house a tender of at least 7 meters.

The boat has been equipped to accommodate a maximum number of 8 guests in three cabins consisting of a master master suite, a VIP cabin in the bow and a double cabin.

The full-beam owner’s suite is well placed in the center of the boat, where the effects of the oscillations of the sea are already less felt, which are further and significantly attenuated with the DSS application.

The crew quarters are located in a beautiful, well-appointed aft area, for a maximum of 8 members. 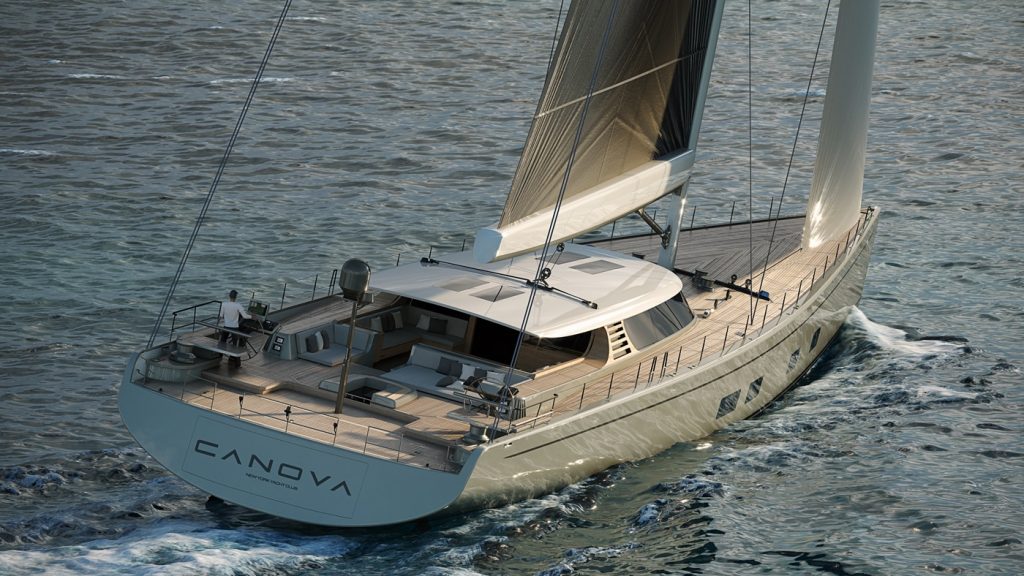 At the end of the works during the official ceremony of the presentation of Baltic 142 Canova the Milanese architect Lucio Micheletti released the following declaration:

“To design a boat you have to enter another dimension to abandon the pure volumes of architecture, both outside and inside, and you have to work with an aesthetic that is not appearance, but depth. Merging calm and strength, empty and full.

Working with materials in a harmonious dialogue avoiding contradictions. “ 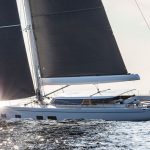 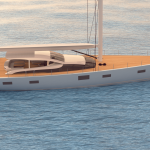 The Liara sailboat is the new sloop of Baltic Yachts