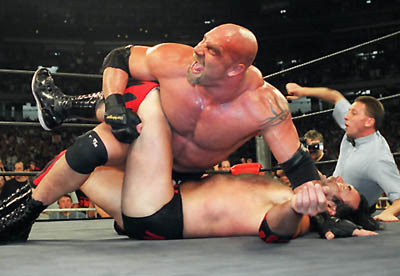 WCW Heavyweight Champion Bill Goldberg puts Scott Hall to the mat during a WCW match July 6, 1998 in Atlanta. Goldberg, a football star at the University of Georgia whose pro career was ended by injury, has become WCW’s most popular wrestler. Goldberg – who is Jewish – says he hasn’t heard many racist taunts, or felt pressure from organizers to change his name. (AP Photo/Erik S. Lesser)